Last night was the opening of the BFI London Lesbian and Gay Film Festival on the Southbank and I was lucky enough to attend the Gala Opening Screening of Gregg Araki’s (‘Totally Fucked Up’, ‘Nowhere’, ‘Mysterious Skin’) new end of the world comedy drama, ‘Kaboom’ starring Thomas Dekker, Hayley Bennett, Juno Temple and James Duval. 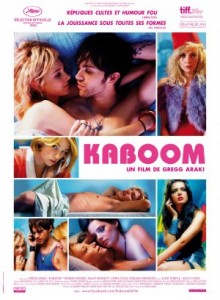 Before the film started, the audience was introduced to the film by Araki himself and it was really interesting to hear his background to the film. He mentioned that an older generation of people constantly come up to him and tell him how important his films of the 90s were to them and how they got them through certain dramas of growing up. Araki wanted to do that again but for a new generation with ‘Kaboom’ and allow a new audience to have the same privileges that his 90s audience did. When I spoke to Araki afterwards, he told me that being almost 20, I was at the exact age that this film is aimed at.

The film follows 18 year old film student Smith (Dekker) who is plagued by a dream filled with people he does and doesn’t know as he walks down a white hallway and towards a door with the number 19 on it. What is behind the door? Watch the film for yourself to see. Over the next hour and a half, we watch Smith as he tries to make sense of the apocalyptic dream while living like an everyday teenager.

Smith fantasises about his sexy but stupid flatmate, Thor (Chris Zylka) whilst sleeping with his new friend, London (Temple) and casually meeting a mysterious man at a nudist beach (Jason Olive). Mix that in with his ‘partner in crime’ Stella (Bennett) who is trying to break up with ‘witch’ Lorelei (Roxane Mesquida) and the end of the world musings from resident pot head, The Messiah (Duval) and you may start to get a bit of an understanding of the film. As Smith says, “weird is starting to be the new normal.”

The film raises several interesting questions throughout about the nature of film, representations of identity, the fluidity of sexuality and at the end of the day, the nature of melodrama for teenagers. Within the context of the festival that I saw ‘Kaboom’ at, it is interesting to note the LGBT issues within the film and how they work in the bigger world. One of the themes that I will be following throughout the festival is whether the LLGFF need exist with mainstream representations of queer relationships appearing in films like ‘Milk’ and ‘Brokeback Mountain’ but it is interesting to note that within what is classed as queer cinema, the queer relationships are not the main topic of the film, it just so happens that the characters are LGBT. When speaking to some people who were around for the festival and for the film last night, it was interesting to hear their perspectives on the representations of queer identity and there seemed to be a universal agreement on the need for a festival like LLGFF.

‘Kaboom’ is certainly a very funny and interesting film for a new generation of queer cinema and it is very possible to read the end of the world drama as a metaphor for a teenager growing up and discovering who he is because at the crux of the film, ‘Kaboom’ is about identity and Smith fully realising his potential.

A highly recommended film, look for the general release in June.