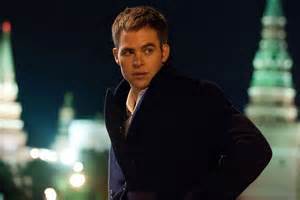 Jack Ryan: Shadow Recruit begins strongly, as Ryan (Chris Pine) joins the US Marines following the September 11 attacks on New York, and is then recruited by the CIA after recovering from a helicopter crash in Afghanistan. It’s lean storytelling, with little wasted exposition, though there is one early letdown which hints at the film’s retro sensibilities: when a recuperating Ryan has a heart-to-heart with doctor Cathy Muller (Keira Knightley) a string section swells, as if the audience wouldn’t clock that it is intended as a significant exchange.

Other old-fashioned elements are more welcome. In pitting America against Russia Kenneth Branagh – who also directs – gives himself a licence to have fun throughout by offering an accent which sounds as one would expect from a Roger Moore-era Bond villain. His performance as Viktor Cherevin, who plots to inflict damage on the US economy by staging a terrorist attack while manipulating the stock market, gives the film a satisfying naffness along similar lines to last year’s corrupt-mayor yarn Broken City.

Stylistically, though, Branagh is far more influenced by Bourne than Bond. Shaky handheld-camera shots and rapid cuts abound; at times in the fight scenes it’s hard to tell who is thumping who. And as pointed out on BBC’s Film 2014 this week, the influence of the Bourne trilogy extends as far as the fonts used during the film and in the closing credits.

There’s plenty of enjoyment to be had before that. Branagh uses the fast cuts to effectively generate suspense as Ryan breaks into Cherevin’s office – Muller, now his partner, is (of course!) left at dinner as a tempting distraction for the errant Russian – and the set-piece is handled deftly, even if the titular hero’s engineered exit from the restaurant is implausible. Pine is fairly dull as Tom Clancy’s creation, though provides a counter to Branagh’s OTT dramatics.

It never surprises and rarely grates; writers Adam Cozad and David Koepp throw in plenty of spy-thriller staples, but by packing plenty into its 105 minutes it doesn’t outstay its welcome.