In the Fog Review 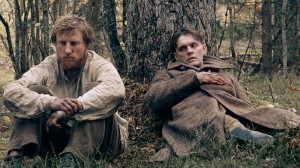 Though its opening shot (a roaming, choreographed long-take that doubles as a showcase for impressive production design and period detail) suggests a war film as gruelling as, say, Come and See (1985), In the Fog (V tumane) is for the most part a quiet – and, perhaps belatedly, a haunting – film, one that utilises its minimalist template to intermittently compelling effect. A parable at heart, it is the second fictional feature from Belarusian writer-director Sergei Loznitsa (following 2010’s My Joy), and is adapted from a 1989 novel by Vasil Bykov.

Somewhere along the western frontier of German-occupied USSR soil during World War II, Sushenya (Vladimir Svirskiy) is visited by an old friend, Burov (Vladislav Abashin), and a fellow officer Voitik (Sergei Kolesov). Wrongly suspecting Sushenya of having collaborated with the Germans at the expense of three compatriots, Burov and Voitik set off into the night with Sushenya to serve justice. When German police arrive at the scene of Sushenya’s would-be assassination and Burov is injured in the brief ensuing shoot-out, however, Sushenya and Voitik must decide firstly what to do and secondly how to do it.

Long before culminating with a literal mist, the film bears the burdens of a more figurative but heavier fog (its most iconic marketing image is that of Sushenya laboriously carrying Burov on his back). There are no winners amidst the fog of war: a murky swamp of compromised morals? In a place beyond the pines in the middle of the night, Sushenya’s last wish is to be spared the indignity of being shot and buried on terrain that, come winter, will be a swamp, and persuades his old friend to do the deed by sandy ground…

In a general sense, the two friends have been torn apart by the imperatives of war; but in a more specific sense (note typecast Romanian Vlad Ivanov as a straightfacedly cruel German officer), the film might be seen as a legitimate rallying cry not only against fascism, but the fears it exploits and the communal trusts it severs, at a time when its ugly economic foundations and correlating warning signs are beginning to reappear.

Unfolding via lengthy flashbacks (cued by simple fade-ins and -outs), In the Fog‘s somewhat mannered approach is elevated or anchored by the bleached-out daytime grains of Oleg Mutu, the Romanian New Wave’s chief cinematographer, which made this critic’s experience of viewing the film via DCP an inevitably frustrating “if only”. See it in the right mood and viewing conditions, however, and it could be a certified winner.