Koji Fukada’s Harmonium begins like a still, mirror-like pond. It’s quiet, beautiful and reveals little. This is the core of the film, a human drama that softly exposes the dynamics of its characters and relationships. Fukada proceeds to drop increasing large stones into this serene vision, setting off ripples, exposing what lies beneath the reflective surface and creating a shocking and violently emotional wave.

The film begins in the unremarkable home of Toshio (Kanji Furutachi), his wife Akie (Mariko Tsutsui) and their daughter Hotaru (Momone Shinokawa). Immediately Toshio and Akie’s relationship looks strained though nothing is divulged as to the reason why Toshio barely speaks and Akie seems to be permanently frustrated by her attempts to play happy family. 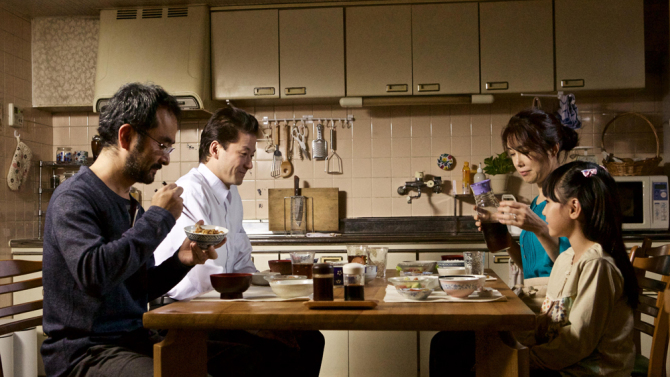 Things begin to change with the appearance of Toshio’s old friend Yasaka (Tadanobu Asano), who has just been released from prison. Without a word to Akie, Toshio invites Yasaka to stay in their home and gives him a job with his small metalwork company. Yasaka is the epitome of Japanese manners, tidy, almost severely polite, but little breaks in the veneer offer something bubbling under the surface. The history of Toshio and Yasaka is left unspoken, and the tension between the three now residing together surfaces in myriad ways.

Fukada’s writing plays on the burden of secrets and how they can strain and expose frailties within. Toshio and Akie struggle to be happy but Toshio is unable to find a way to come to terms with his past. It takes something shocking to shift them from their malaise and in the aftermath, redefine what it is they mean to each other and to Hotaru. 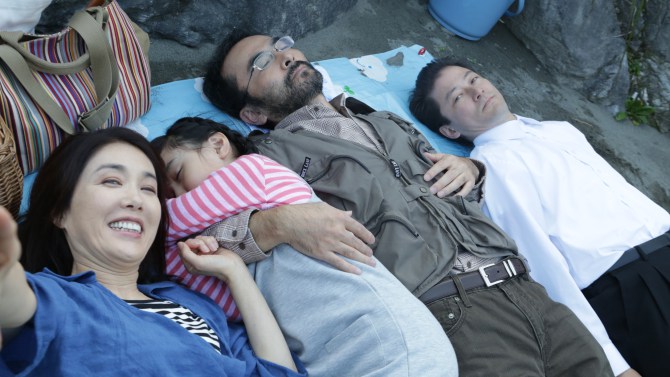 The ripples of the stones colliding with the placid lake are the many consequences of actions, allowing Fukada to touch upon different subjects briefly but with significance. He explores the dark side of human nature, how it expresses itself in adversity. Yet he isn’t damning humanity, there are characters in this story that remain steadfast in their purity, though not immune from suffering.

Everything in this film is about human emotion, from anger to excitement, lust to grief. Fukada watches like a owl on a nearby branch, never focussing on anything but the most prominent reactions, never the thing to which they are reacting. The stone is no longer interesting once it has sunk beneath the pond surface, best to sit back and watch the ripples.