Supermodels, living the stuff that our mortal dreams are made of, those beautiful demi-gods who earn millions of dollars and literally don’t have to put their own socks on.
In their documentary Girl Model, David Redmon and Ashley Sabin take a look at what happens at the bottom of the heap, the adolescents and prepubescents just starting out and what they’re put through by their agencies in the hope of being the next big thing.

In Novosibirsk, Russia, gaggles of nubile teens stand in swimsuits in front of floor-to-ceiling mirrors. Like young girls everywhere, they want to be supermodels.
One such girl is Nadya Vall, 13 years old. She stands in front of scout Ashley Arbaugh’s video camera and says in broken English her name and where she is from like an echo from Abi Morgan’s Sex Traffic (2004). She’s tall and very slim, with long blonde hair and huge blue eyes. She looks ethereal, almost slightly alien.
She doesn’t yet know it, but she’ll soon be in Japan, living in a tiny apartment, going to castings with her roommate Madlen in the hope of making it big. 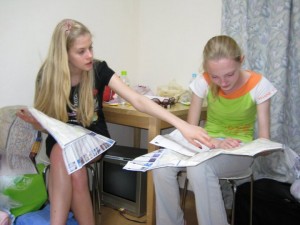 Balancing out Nadya’s innocence is Ashley, the experience, who also spent her teenage years modelling in Japan. She is jaded about the modelling industry, but is unwilling or unable to stop working in it, and despite her own bitter memories, still feeds young girls into a hungry market on a false hope.
Redmon and Sabin also introduce us to Tigran, the director of Noah Models, the modelling agency in Russia. Tigran sees his work as biblical, he is Noah of the ark, rescuing young beautiful girls from poverty and sending them away to a ‘better life’.

So far, so suspect, and it only stands to get worse with the implication of prostitution. Ashley smiles wryly and shrugs when she says that Messiah, head of the Japanese agency “loves models”, and comments on their age difference; he is 40, the models are around 15. Messiah admits that his agency does not make any money from new models, but cannot justify why his agency brings so many models into Japan when there isn’t the work for them. Ashley also says that there’s a fine line between selling your body as a model and as a prostitution, and anyway, some countries don’t see prostitution as a bad thing. She doesn’t sound remotely convinced or convincing.

Redmon and Sabin follow their subjects quietly, interfering little and never on-screen, their voices not appearing on screen, passing no judgement. They dip their toes into the water, but Girl Model just scratches the surface of a potentially fascinating world. There is so much to discuss in terms of modelling, whether it’s unfair treatment, low pay, child labour, eating disorders, or photoshopping and airbrushing perpetuating an impossible beauty ideal, but Girl Model doesn’t explore any of them. It is simply too big a topic for one documentary.
Instead, it simply shows us one girl’s journey, and the narrow focus seems a little shallow. Whilst Nadya’s experience is sad and unfair, it isn’t attention-grabbing or immersive. Nadya doesn’t tell us why she was so desperate to be a model, or how the experience is affecting her, or what she hopes from the future, and the audience constantly remains on her outside which hampering any real connection that we can have with her.

The more interesting character of the two is undoubtedly Ashley, but she is given less screen time. We are also given access to Ashley’s video diary from her time as a teen model in Japan, which give us another unflattering view of the modelling industry.
The most balanced view comes from a fellow model, aged 23. She explains the cycle, but comments that there is no one element entirely to blame in plucking children from the countryside and plonking them in a foreign country and taking advantage of them. She says that the girls are not to blame because they have been lied to, and they’re just trying to live out their dreams. Their parents have been lied to as well, the contracts are in Japanese and are essentially useless regardless, one clause being that the contract can be changed whenever the agency want to change it. On the promise of a lot of money, they send their daughters abroad for a better life. She goes on to say that the agencies use such young girls because that’s what the demand is for, it is the way to make money. The stylists and designers are lied to about the ages of the girls they are shooting; Nadya is seen being told to say that she is 15 years old, and they choose the youngest looking models because they make for the most profitable advertising campaigns. Consumerists lap up the slight, elfin figures after being told that that is what beauty is, and that is how they should try to look.
Redmon and Sabin don’t comment on this cycle, or suggest how to remedy it, and neither, as independent observers, should they have to. However, neither should this be presented as a hopeless situation, because it is not. Unions for models have been in the UK press since 2007, some catwalk shows have brought in minimum weight requirements, and there has been a growing demand for “real women” in advertorials and campaigns.
The fashion industry can be glorious and it has produced incredible work. It remains an easy target and whilst there is much to criticise, it should not all be tarred with the same sensationalist brush.

Whilst the subject matter is fascinating, and the documentary is sad and effecting, Girl Model leaves many questions unanswered and many avenues unexamined, and what feels like a lot of potential wasted. It didn’t dive into it’s specific area with enough gusto to really get under my skin, or tell me something I didn’t know.
Girl Model is definitely worth a watch, especially if you’re looking for something to counter the glossy cover girls staring back at you from the newsstands.