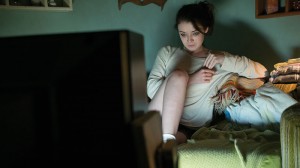 It really is time for a new bad babysitter film and Michael Thelin’s provocative, engaging and terrifying Emelie might just be that film. On the night of their anniversary, the Thompson’s normal babysitter isn’t able to help so they agree to try out her friend, Anna (an incredible performance from Sarah Bolger). What they didn’t expect when they opened that door is for all their lives to be changed forever and that the night ahead would be one of the most trying, dangerous and scariest nights of all their lives. The trope of bad babysitting reoccurs throughout the decades, songs have been written about it and entire stories have spun based on it but Thelin (and screenplay writer, Rich Herbeck) have come up with a twisted tale of how the past can haunt you and ultimately determine the choices that you make for the rest of your life.

Emelie is deliciously dark – both in terms of the action but also the setting. Halloween, A Nightmare on Elm Street, The Exorcist – these films have all bathed in the darkness of suburbia, the potential that anything can go bump in the night and the vast emptiness of the world on a busy street full of neighbours. The darkness of Emelie truly swallows up everything around and from the moment that the door opens and Anna enters, the suspense and tension that Thelin and his crew aim to create take over the audience and they become implicit in the action as much as the characters.

When Anna arrives she seems perfect; attentive, interested and ready for the night ahead but as soon as the door closes and the Thompson’s are on their way out for dinner, her real side comes out. She is hiding something and it is going to be down to Jacob (Joshua Rush), the eldest of the three siblings, to make sure that his younger brother and sister stay safe throughout the night. At first she plays games with them; they are allowed to stay awake and play with things around the house that they aren’t meant to play with, they make noise and get excited – this all seems perfect. The juxtaposition between the joviality of the children with the intensity of the light in the room and the darkness that Bolger is able to create around her character is strong and forceful across the screen. But soon things turn dark. 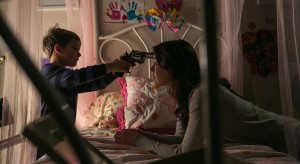 Phone lines go down, lights are turned out and soon a game of cat-and-mouse between the children and their babysitter ensues and neither side is against resulting to violence. When Jacob works out part of the story, through a series of well thought out flashbacks the rest of the story is filled in and for a horror film, this story feels scarily real and plausible – that is the true horror of it all.

By no means is Emelie an easy watch, but it is a commanding piece of cinema that requires the attention of the audience from the very first shot. It is guaranteed to keep anxious parents awake at night. Part of the drive of the film is trying to work out the mystery – not only is the situation that is being shown the only thing playing on the mind of the audience but why this is happening is something that Thelin and Herbeck have promised they will reveal before the end. The entire cast are brilliant on screen, especially the young children considering some of things they have to do on screen. The chemistry between Bolger and Rush is brilliant – they understand one another from the very start of the film and very much represent good versus evil, adult versus children and light versus dark. They can say things to one another without actually saying any words.

Like Home Alone on steroids and with a lot more at stake, Emelie is intense, spine tingling fun that new parents should most certainly not watch.