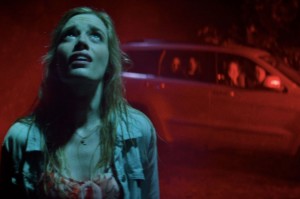 As with most films, which are alien invasion skewed, the moment that you show the alien or whatever the director/writer/designer of the film feels an alien should look like then you lose all tension and mystery from said alien invasion film. That is no different for The Vicious Brothers Extraterrestrial, which whilst being fun and and enjoyable to watch, holds little mystery or suspense for the audience. Not since Alien in fact has the mysteries that lay far away from this planet been so boldly and brilliantly portrayed, it caused the downfall of Signs and that was a great until the revelation. Aliens in all their different iterations and portrayals have mostly ticked certain criteria boxes; we assume they are a greyish hue, possibly very tall, don’t wear anything like clothes, tend to have odd shaped eyes and move slowly. Of course this has been the idea of the alien in books and films for as long as anyone can remember and Extraterrestrial adds nothing new to what aliens could look like. But really that isn’t what The Vicious Brothers set out to do; instead Extraterrestrial is a teen slasher movie under the guise of an alien abduction movie. It’s silly, funny and frankly rather enjoyable.

April’s (Brittany Allen) parents have gotten a divorce and are selling their cabin out in the middle of the woods (hint hint). She is helping out by taking pictures of it to post online (surely the estate agent should have done that?). Along with her high school sweetheart, Kyle (Freddie Stroma), they are planning a chilled out weekend trip down to the cabin. But as with any tongue in cheek high school slasher, there needs to be some skin and as Stroma’s strides into shoot shirtless, director Colin Minihan ticks another criteria box. 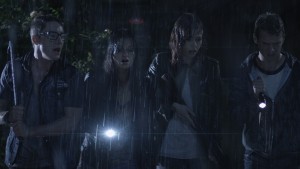 the door for this one. Of course the weekend with the two of them is going to be interrupted by friends that Kyle has invited along for the trip – how often do you get a free cabin in the woods to party at? Of course you need to bring along friends. So enter Melanie (Melanie Papalia from The Den), Seth (Jesse Moss) and Lex (Anja Savcic). What happens when you get a group of young people together on a trip in a film? They drink, let their hormones run wild and do stupid things with fireworks of course! Whilst the group are on their way to the cabin, they bump into Sheriff Murphy (Ally McBeal‘s Gil Bellows) who has a chip or two on his shoulders. He doesn’t like people he doesn’t know coming into his little patch until he recognises April from when she was younger. He seems mysterious in a sort of obvious way and is suspicious of the group. He warns them not to be stupid because otherwise he will come for them.

After a party and mismatched proposal a UFO crash lands nearby. The sight disturbs them and they go to investigate. It’s dark and the tension of what the Brothers have set up within Extraterrestrial is interesting. They are making all the right moves, throw in an old gun-ho neighbour and killer aliens and you have all you need.

As the film continues it turns into a mixture of the home invasion movies, meets teen slasher, meets alien abduction with just enough homage to Scream and Alien for it to pass it’s film class. Aliens appear and start to kill anything in their wake, then abduct the rest. The film’s biggest weakness is the lack of knowledge of where it is going and when – it has about four suitable endings, which follow one after the other and make this film just a bit too long. At one point, April realises that she loves Kyle as he gave himself up for her safety and decides she must try and save the day to be with him. 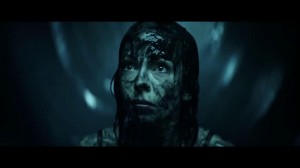 Whilst the story suffers, the acting from the cast is tuned into what they are doing. Once again, they each tick the boxes. Scream queen. Idiot that turns into the douche. Good looking jock trying to save the day. They are all here in their pride and glory, so with what the cast have to work with, it ends up okay.

If you enjoy this sort of genre, it is certainly one worth checking out. Colin Minihan does a great job setting up a tense atmosphere and yet he also breaks that down but whilst it lasts its good. He is a very capable director, which is what makes Extraterrestrial gripping until the end – even if it adds very little to the genre overall.