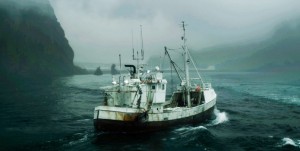 “Of course, I’m nothing but a drop in the ocean,” says Gudlaugur Fridthórsson, the real-life Icelandic fisherman upon whom The Deep (Djupio) is based, in a 1984 television interview from which extracts play over the film’s end credits. It’s a stereotypically modest statement from someone who has just survived six or so hours in seawaters of 6°C, and a further three on land with an air temperature of -2°C before finally receiving medical assistance. Fridthórsson’s choice of phrase might be seen as an instinctive defence mechanism against would-be sensationalism, and in dramatising his tale of survival for the screen, director Baltasar Kormákur and co-writer Jón Atli Jónasson have fashioned a suitably low-key film about what still is a scientifically implausible truth.

On the evening of March 11, 1984, a small fishing boat capsized about three miles east of Heimaey, the largest of Iceland’s volcanic Westmann Islands. Two of its five crew members drowned with the vessel; three others held onto the keel for less than an hour before that too sank. As the film tells it, Gulli (the character based upon Fridthórsson, played by Ólafur Darri Ólafsson) attempts in vain to keep fellow boatmen Palli (Jóhann G. Jóhannsson) and Hannes (Bjorn Thors) alive, and quickly finds himself alone at sea, treading water with seemingly no hope of survival.

That Gulli does survive (or that Fridthórsson did) is quite remarkable, of course, and in the film’s second half, scientists struggle to grasp exactly how he managed to survive the temperatures he did; the most likely conclusion – barely confirmed by the film itself, which sticks to its period timeframe – is that Gulli’s physical bulk in terms of body fat allowed him to endure such cold temperatures for longer than average. Kormákur, who continues his slick sensibilities as demonstrated best by Reykyavik 101 (2000) and Jar City (2006), apparently decided against shooting his protagonist’s gruelling swim ashore without the aid of CGI, and the film as a result is a kind of understated response to the spiritual and stereoscopic bombast of last year’s Life of Pi.

Playing out in its first half at least like the nautical equivalent of 127 Hours (2010), The Deep often demonstrates man’s utter insignificance, not least when cinematographer Bergsteinn Björgúlfsson widens the frame by moving upward and away from Gulli to reveal the sheer expanse of water around him. Ironically, though, after enduring dehydration, sickness, fatigue and the false hopes of another boat passing by near enough to see but too far to reach, it’s when Gulli reaches land that the extent of his fragility (and, of course, resilience) in the face of nature is realised: for all the clamour of waves bashing him ashore, it’s the simple image of bloody footprints on snow that haunt most.