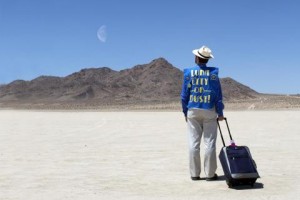 Titular puns and punctuation marks included, Lunarcy! establishes a kind of informal register before it’s even begun. Opening with the quotation, “You don’t have to be tall to see the moon”, it makes a virtue of smalltown idiosyncrasies and is celebratory of an outsider status (fittingly, it’s a Canadian production) by lending a cinematic platform to a few people whose fascination with our Moon goes well beyond expectation, and whose grand designs doggedly and amusingly belie the utter impracticability of their vision.

Simon Ennis’ documentary gives the impression of allowing its cast of eccentrics the chance to speak for (and make a fool of) themselves without much intervention – and it does so enthusiastically and with much panache. In contrast to, say, the Maysles Brothers’ cinéma verité work, Ennis’ approach is maximalist. He rarely stops for breath as he introduces us to his subjects, seemingly aiming to sweep us away with their own passion. There’s always a fine line between merely hanging out with weirdoes and judging them as nutjobs, though, and at regular intervals here, the filmmakers can’t resist drawing attention to the sheer outrageousness of a subject’s comment through some stylistic flourish.

The go-to device here is to establish a rhythm and energy that is complementary to the interviewees’ own energies and rhythms, through Matt Lyon’s impeccable editing and Christopher Sandes’ energetic steel-pan score, only to suddenly bring all music to a halt and to linger in the awkward silence that follows a more outlandish statement, such as when Dennis Hope, who claims to be the owner of the Moon and who has been selling plots of land on its surface since 1980, chats quite unironically about his own “honesty quirk”. The resulting bathos is comical (not cosmical), though as these “characters” become more familiar to us, the narrative technique can be repetitive.

A planet that is intolerant enough of geekdom to continually exile it to its social margins can be a hostile place to live, and the Moon is viewed by and for social outcasts here as a safe and plausible retreat; someone confesses early here that he isn’t content with calling home “anywhere this side of the sky”, which is a sad indictment of everyday life on earth. As the film develops, it becomes strangely poignant, as we gradually begin to get a sense of the extent to which life on earth has been a source of misery and/or frustration for these interviewees.

Most touching are those passages in which Christopher Carson, the founder of and sole campaigner for a project that wishes to build a habitable city on the Moon’s surface, admits that he’s been something of a “social pariah” and a victim of bullying (his parents also reveal he has autism). As Carson attends a space convention and speaks before a receptive audience, we sense that his real quests are merely acceptance and popularity. And who wouldn’t relate to such an earthly demand?