Classe Tous Risques (Consider All Risks) was one of many films caught in the riptide of the French New Wave. It was released in Paris in March 1960. A week later Breathless (also starring Jean-Paul Belmondo) opened in cinemas and swept all before it. 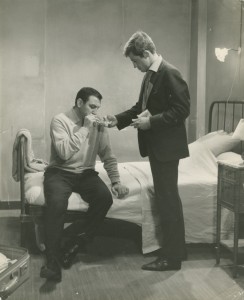 The BFI’s latest discovery, Classe Tous Risques is a startlingly direct portrait of Parisian gangsters. Our hero is Abel Davos (played by Lino Ventura an Italian born character actor with the heft and brooding presence of Stanley Baker). We follow Abel from Italy to France as he tries to break out of a life on the lam. And what does that mean but one last job, to score big and settle down, retreat to normality with his wife and kids.

What’s unusual here is the ‘one last job’ story is flipped on its head. The crime comes early and the aftermath becomes a deconstruction of gangster life. The unhurried pacing shows the literary origin of the script with the occasional narrator adding a pulp flavour. However the source novel was by death-row-inmate-turned-writer José Giovanni and his inside knowledge brings a blunt realism to the crimes. There is incisiveness and clarity in Claude Sautet’s direction; he never resorts to gangster clichés and when the flashes of violence come they ring true with sharp staging and zero theatrics. 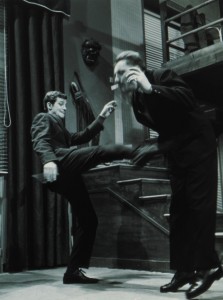 Abel is a downbeat character, driven to carry on while always seeming resigned to his fate. In sharp contrast to him is the late appearance of the young Eric Stark (Jean-Paul Belmondo). His name evokes James Dean’s Rebel Without A Cause Jim Stark, and like him Eric seems out on his own, a wounded man who’s taken to isolation. But there is also a relaxed charm to Belmondo’s performance. His love story with the well cast Sandra Milo is a minor part of the film but beautifully played. There’s real chemistry here and the sparks between these young lovers provide hope, showing what life can be and what Abel seems so far from.

It is both unusual and touching the way this young hoodlum becomes Abel’s protector and Sautet implies that Eric may be the only honourable thief left in Paris.

Fifty years on this tale of loyalty and regret still seems fresh. While the New Wave was crashing the world never realised that Sautet (along with Jacques Becker and Jean-Pierre Melville) was reinventing the gangster film. Not that Abel seems that bothered. He’s considered all risks and done it anyway. Time to light up a Gauloise and take a walk.

‘Classe Tous Risques’ is released on 13 September 2013 at the BFI Southbank and selected cinemas nationwide.