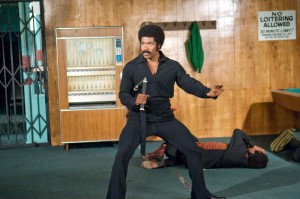 A comic spoof film, Black Dynamite is a parody on the 1970’s Blaxploitation genre. Black Dynamite (White) is an ex-CIA agent, now part-time pimp, who is called back to the CIA after his younger brother is murdered by a drug dealing scumbag. The rest of the films plot then follows Black Dynamite’s journey to find the murderer and avenge his brothers death. On his journey into the dark world of drugs he also decides to lead a crusade to try to rid the streets of that ‘new drug’ heroin.

Director Scott Sanders makes Black Dynamite work well by using deadpan to spoof the Blaxploitation genre, with the lines delivered completely straight faced by the cast. Michael Jai White carries off Dynamite’s vain persona perfectly, completely overdressed in glitzy suits and complete with fake moustache, nun chucks and 44 Magnum. His funniest lines are often in scenes where Dynamite is wooing the ladies, but his hilarious comebacks in the fight scenes are also comedy gold, (not being included in this review so as to not spoil their effect). 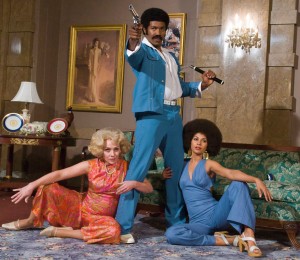 The film’s action scenes are often filmed with the intention to look sloppy , for example a quick cut shows a stunt man stopped in his tracks and then restarted, but the film clearly had the necessary budget: White has the king fu skills in the fight scenes, and a helicopter explosion look perfectly convincing. Dynamite also teams up with some Black Panthers on his quest, and the film feels reminiscent of the satirical Four Lions here as the Panther members are slightly idiotic; hysterically exaggerating and repeating their dialogue, getting killed off almost immediately by the bad guys.

Not only is the film full of hilarious references and stereotypes from Blaxploitation movies, but its visual style also takes a comic look at the genre. It highlights the 70’s filmmakers’ laziness, even using the same shot of a car rolling and exploding down a hill for two completely different car chases.  Other intentional stylistic devices include the consistent use of a boom mike at the top of the screen, and the constant overuse of zoom, split screen viewing and wipe transitions.

Black Dynamite is the funniest film of the year so far, and you’ll be quoting its lines for days afterwards. An absolute must-see, we’ve embedded the hilarious trailer below so you see just how great it is.