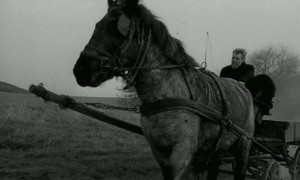 Graced with the best opening scene of a film in recent memory, The Turin Horse presents the daily toil of an irritable farmer (János Derzsi) and his resilient daughter (Erika Bók) with sparsity and simplicity. Apparently its director Béla Tarr‘s last film, the work is a troubling send-off indeed.

Those already attuned to Tarr, the inimitable powerhouse auteur whose Damnation (1988), Satan’s Tango (1994) and Werckmeister Harmonies (2000) rank alongside the finest films of their time, should feel both reassured by and sceptical of The Turin Horse. On the one hand, Tarr’s principal entourage of collaborators come intact (adding to assistant director Ágnes Hranitzky): Fred Kelemen‘s black-and-white cinematography is typically absorbing, while Tilman Büttner (who also worked on Russian Ark) and Marcus Pohlus‘s carefully choreographed Steadicam operating is accompanied by ceaseless howling winds, heard between bouts of Mihály Vig‘s beautiful score. Indeed, there’s a certain musicality to the repetitions of the narrative, scripted with Tarr by László Krasznahorkai.

On the other hand, after the sustained evolution from the individual to the social and even to the cosmic in the three works Tarr directed between 1988 and 2000, this film – following the hounded production of 2007’s The Man From London – is a noticeable return to a narrower perspective. Focusing on two characters – neither of whom are the film’s most interesting, that being the eponymous creature who features far too little after a magnificent overture – The Turin Horse is a deliberate concentration of resources and, seemingly, intellectual energy.

In the farmer and his daughter, the makers see a blank canvas worth not so much investigation as mere presentation: here, the daughter begins the day by dressing her father, endures the harsh winds outside as she goes to fetch water from the well, boils potatoes for each to peel and eat with their hands – her calmly, him anxiously; rinse and repeat, ad infinitum. And, as an artistic response to the world, it might be an argument made ad nauseam. Capitalism drains us of strength: where’s the reward and what’s new?

But this film is as remarkably engrossing in its way as was Sharon Lockhart’s Double Tide on the AV Festival‘s opening weekend. Both films strip down life to its essentials, observing or shaping a laboured monotony that acquires its own striking rhythm. The repetition, unfolding over five and a bit days (comprising only 30 shots), establishes its characters’ routine so effectively that the introduction of new elements is as striking to us as it is to them. A visit, firstly, from a neighbour (Mihály Kormos), who gives a monologue about how humans are as much to blame for their own destruction as is God, provides the first explicit hint towards an impending apocalypse (if this is Tarr’s last film, he’s taking us down with him). Later in the film, a band of gypsies approaches the house and well and gives the farmer’s daughter a book, whose words foretell a certain doom. Soon after, the well dries up.

Beckettian in tone, the film sees the pair finally decide to brave the winds outside. Taking their horse with them, they pack up their belongings and trudge off into the distance and beyond the horizon as if reluctantly re-enacting The Seventh Seal (1957)’s departing dance of death. Tarr’s camera, knowing better, doesn’t follow them; indeed it remains in the immediate vicinity of the house and adjoining stable, waiting patiently for the three to return over the hill, defeated.

No reasons are given for their return, of course, just as no reason is given for the Maguffin that contextualises the film at its outset: in voice-over, a narrator relates in present-tense the alleged incident that occurred in Turin, 1889, when the philosopher Friedrich Nietzsche was moved to tears by the sight of a cabman whipping his horse. As is known, Nietzsche spiralled into dementia thereafter and died a decade later; this film’s makers, however, are more interested in the fate of the horse.

That is not to say the film is set in the late 19th century, however, or in Turin. Consciously pared down, Tarr and co.’s universe uses the historical anecdote as a starting point for some comment on our present state of affairs. As such, its necessary components are monotony and annihilation. With the end certain, ideals are past; a life prior to grave errors is irretrievable. The end of history returns. 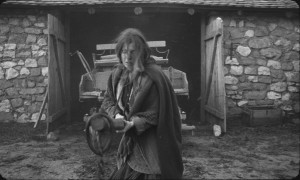 Following the deep suggestiveness found in Satan’s Tango and Werckmeister Harmonies in particular, this is an unfortunate intellectual appraisal. In the 1994 film, which runs seven hours long, the depiction of life as experienced by the inhabitants of a collective farm towards the end of Stalinism in Hungary is indubitably grim: marked by alcoholism and monetary scheming, the characters’ daily drudgeries are shot with an unremitting bleakness. But there are also attempts at understanding this disintegration, which seems to be the result of geographic isolation and economic dispossession, two things aggravated by relentless rain, which one character describes as part of “an insufferably long autumn toward the end of October”. The symbolism seems clear.

Furthermore, at the centre of Satan’s Tango‘s narrative is the ambiguous figure of Irimiás, played by Tarr’s regular music composer Mihály Vig. Irimiás insists not to be taken “for a liberator, but a sad researcher investigating why things are as terrible as they are”, words that charm and seduce the other farm workers, who put their trust and hopes in him. In the film’s penultimate chapter (of twelve), Irimiás’s self-preservationism is made evident. Meaning well, he is consumed by a bureaucracy far removed from the barren mud of the collective. His betrayal is accounted for by the systemic.

The plot of Werckmeister Harmonies, meanwhile, involves the arrival into a provincial town of a large truck, housing a whale carcass that is billed as a must-see attraction. Kept in the darkness of the vehicle, the creature draws in crowds of inhabitants, who are then incited to violence and riots by an unseen figure referred to only as the Prince. It is not difficult to see in this premise an exploration – never mind its formal interest – of the mysticism perpetuated by a right-wing, totalitarian body, and the dangers of allowing one any formal governing authority. In a key scene in the film, hordes of rioters raid an abandoned hospital to wreak purposeless havoc, only to be thoroughly humbled by the discovery of a fragile, naked old man. Social order is restored: clearly, a bleak landscape is merely a starting point for an examination far from hopeless.

But the allegory of The Turin Horse carries no such nuance. It is a consciously shaped microcosm, in which we see a metonym for humanity itself: untrusting, inhibited, and at any rate unable to do much of anything at this historical juncture even if it wanted to. An unpleasant revelation indeed!

Of Tarr, whose career began in the social realist vein, we observe a disappointing turn with this latest and last project, and find in it worrying conclusions similar to those observed, last week, of Stalker (1979). Because The Turin Horse is so aesthetically beguiling, critics – this one included – might find themselves tacitly championing its makers for reminding us that the end is nigh and nought can be done. If such complacency is the order of the day, Tarr’s retirement is possibly for the better.