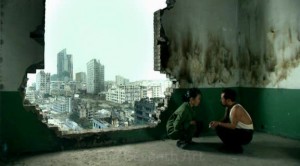 A somewhat surprise winner of the Golden Lion at Venice in 2006, Still Life (Sanxia haoren) subtly works what might have been a socio-historical backdrop into the foreground of an affecting double-tale of loss, so that it is made an active element of the drama. As such, Zhangke Jia‘s film facilitates a unique energy that comprises both melancholy and wit.

To contemporary Fengjie Country returns Sanming (Han Sanming), a miner in search of his daughter and former wife. Driven on a motorcycle to his stated destination, Sanming is informed the town he seeks is now completely underwater, an early victim to the Three Gorges Dam, the real-life hydroelectric engineering project located in the middle of the Yangtze River. Settling in a neighbouring village, Sanming continues to seek his family while joining a crew of labourers employed to demolish the area’s buildings before it too is flooded.

Meanwhile, Hong Shen (Zhao Tao), a nurse, arrives in the region looking for a husband from whom she hasn’t heard for two years. Finding his friend, she discovers her spouse has moved on and made another life without her; following this revelation, she decides to move on herself.

The Three Gorges Dam, in actual construction since the mid-1990s but conceived as far back as the early 20th century, has resulted in the displacement of over 1 million of the Chinese population, including over 1,200 villages. Government schemes to compensate those affected by it have been discredited by corroborating reports of corruption and embezzlement; whole regions of populations have been forced to migrate to new areas without the proper provision of means with which to start anew. 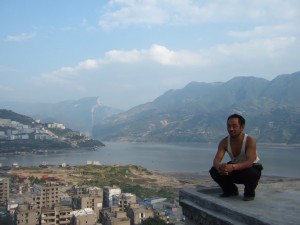 Still Life‘s fragmented narrative of almost self-contained vignettes unfolds against this devastation. Characters suffer the torment and angst of change, yet continue in the face of it, their struggle taken for granted. The incorporation of history as a still-uncertain element of present life allows the film to double as a document of its locale while providing an elusive, almost improvisatory fiction. It shares its location, subject matter, production date and personnel with its director’s other film of the same year, Dong, an actual documentary that is shorter in length and narrower in scope.

There are many funny moments in Still Life. Fresh off the boat that brought him and other tourists to the region, Sanming is made to endure an improvised entertainment show so that it’s organisers can dupe the audience into paying up afterwards. When Sanming says he has no money, he is forced to give up his bag so that its contents can be rummaged through. Asked to reveal what he is holding/hiding in his pocket, he hesitates for half a second before obeying the command and fetching out a flick-knife, whose snap’n’glint takes the would-be thief aback.

Complementing this introductory scene is a more poignant one later in the film, in which Sanming toasts his fellow demolition workers and tells them of how dangerous his coal mining work back home is. “I will never forget you,” he says. Facially contained and physically unassuming, his will to defend himself against opportunism is immediately winning; with a vulnerability suggested by his white vest, he cuts a surreal figure of quiet fortitude throughout the film, as the town literally falls around him.

More surreal yet are those inexplicable moments of the sublime, such as that aside in which guests at a government official’s terrace party gather to watch the lights of a nearby bridge be switched on, or that in which an abandoned concrete structure is suddenly imbued with a wishful mind of its own and seemingly lifts off like a rocket, to escape an impending destruction.

Lik Wai Yu‘s HD photography captures both these moments with an astonishing romance, contained in which is an optimism for the dialectic: imposed change can be intolerable and inhuman, but alongside its more obvious transitions are those imperceivable, intersubjective shifts whose results and meaning are still undecided. The skies, meanwhile, are a neutral white, a foreboding or a blank slate depending on interpretation; and somewhere in the distance, between one half-demolished building and another, a solitary figure braves a tightrope.