AV Festival: Once upon a Time in Anatolia 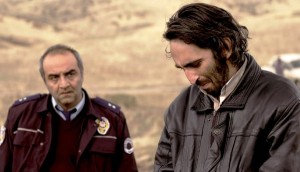 A further move away from the more autobiographical concerns of earlier works,  Nuri Bilge Ceylan‘s latest film is a wordy police procedural in which the words overwhelm the procedure. Less investigative thriller than police drama, the film ostensibly utilises conversation to traditionally establish and develop its ensemble of characters; but as the camera lingers ever closer to its subjects, their otherwise banal conversations become more fragmented and percolated by suggestive silences and subliminal, pregnant asides.

Ceylan is clearly branching out, and for the better. Following 2006’s deeply personal Climates, starring himself and his wife Ebru Ceylan, he treaded carefully into genre territory with 2008’s Three Monkeys, a loaded drama upon which the thrills of blackmail and sexual desire were injected to create an elusive unease. To Once upon a Time in Anatolia – which, following the 2008 work, is his second script-writing collaboration with wife Ebru and Ercan Kesal – Ceylan brings a strong sense of confidence to early scenes, luring us into the mystery of three police cars driving through the Anatolian hills at night, before offsetting matters by suggesting the real intrigues lie elsewhere.

As police chief Naci (Yilmaz Erdogan) trudges repeatedly and fruitlessly into the dark with Kenan (Firat Tanis), in search of a man to whose murder the latter has already confessed, Cemal (Muhammet Uzuner), a doctor, becomes the unprotesting recipient of chit-chat from firstly Naci’s driver, Arab Ali (Ahmet Mümtaz Taylan), then Nusret, the prosecutor assigned to the case (Taner Birsel). With the absurdity of Naci’s search for a murder victim growing in proportion to the banality of the other men’s talk, this opening sequence lasts longer than we might expect, which in itself forces us to re-evaluate our expectations of the narrative and ponder the significance of such dialogue exchanges as they are happening.

Catalysed by a brief flash of lightning that distorts a rock into a hideous face, as well as Naci’s voiced concern that the causes of murders these days are less psychological than astrological, the film settles into a rhythm and pace all its own, as it provides us with scenes whose lengths alone suggest there’s something deeper beneath their details. A large part of the film’s dramatic strength is its balance between character and information: its characters – even Kenan – are all introduced with equal plausibility and sensitivity, while its performers are all brilliant enough to make their characters exist between and beyond the lines they speak. 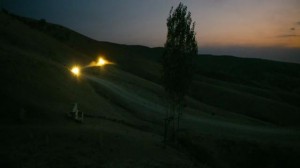 This is no easy task, and that the film succeeds in its portrayal of flawed humans without reverting to sensationalism or emotionalism should be commended as ambitious and challenging. One senses a real melancholy behind these people, their collective brave face somehow upheld in spite of a bureaucratic system antagonistic to the idea of their common humanity. Its first explicit hint is during a surreal aside at the home of a local mukhta (played by co-scriptwriter Kesal), when a power cut envelops the men in a darkness magnified by eerie creaks, a drone of crickets, barking dogs and a howling wind. In from nowhere walks the mukhta’s young, beautiful daughter, carrying a tray of Turkish tea and Coca-Cola, heaven-sent by candle-light and humbling everyone in her midst.

Following the lengthy, unresolved opening, this scene is a risk, and the film’s makers pull off the tonal shift effortlessly, hinting with it at a deeper, more fundamental interconnection between its principal males. Such humanism continues into the film’s latter stages: an extended shot from Cemal’s point-of-view, of a young lad running to return a ball kicked his way, is quietly heartbreaking, not least because we have watched the boy in a previous scene display understandable, violent hostility to another character.

Leaving its more superficial complexities unresolved allows a film to emphasise its more pressing agenda. In the case of Anatolia, the reasons for the murder are never even asked and the relationship between perpetrator(s) and victim is only suggested in a beautiful but vague opening shot; meanwhile, the film shifts with effective ease between individual perspectives and the wider fabric, with its individuals given enough nuance that the psychological and physical space between them retains both ambiguity and intensity.

There’s also a great deal of comedy. The scene in which the murder victim is finally found unfolds like some self-contained sketch full of Laurels & Hardys. With seeming spontaneity, for instance, Nusret-Birsel catches up with his own words in a silence following his open observation that the victim resembles Clark Gable – and begins to laugh, embarrassed. Soon thereafter, the group’s individuals parry responsibility at one another as they struggle to lift the corpse into the trunk of a car following the discovery that nobody brought a body bag.

Distant, Ceylan’s 2002 film, contained some humour of this sort, but it seemed missing from Climates and Three Monkeys. Its return and development here adds further complexity – and sophistication – to an already engrossing drama. Ceylan’s confidence as an artist is no clearer than in the film’s climactic autopsy scene, in which Cemal’s assistant, Sakir (an excellent supporting performance from Kubilay Tunçer), seems to punish the former’s bewildering decision not to report new, ugly evidence by squirting blood upon his cheek. It’s a brief moment of farce to which the viewer doesn’t know how to respond, and it confirms Ceylan’s skill at handling tone.

Even before that point, though, it’s clear that Once upon a Time in Anatolia is its director’s best film to date.

Once upon a Time in Anatolia is released in cinemas Friday, March 16.