AV Festival: Let Each One Go Where He May | Front Row Reviews
Home
Reviews

AV Festival: Let Each One Go Where He May 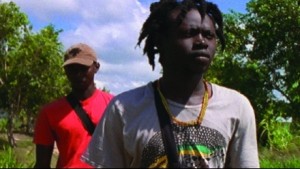 In Let Each One Go Where He May (2009)’s incredible penultimate of thirteen one-take scenes, Benjen Pansa, one of two Surinamese brothers we have followed throughout the film, dons a clown mask and partakes in a carnivalesque ritual acted out in a Maroon village on the Upper Suriname River. Its peculiar, riotous energies come unexpected, and yet, as the scene holds you in its terrific and even terrifying grasp, it seems to be the natural culmination of a narrative whose formal presentation is both confrontational and deceptively hypnotic.

The film also brought a fitting end to the month’s AV Festival film programme, containing as it does the convergence of a recurrent diasporic discourse (seen in the likes of Finisterrae, Stalker, Independencia, Still Life, Colossal Youth, Fate and Frost, etc., etc.) and an approach to narrative time that thoroughly foregrounds its spatial implications – as I’ve argued here, the very phrasing of a term such as “slow cinema” might overlook the fact that it has as much to do with spatiality as it does temporality.

Following in the literal sense two brothers – Benjen and Monie Pansa – as they retrace the migratory journey their ancestors undertook in fleeing their Dutch slavemasters 300 years ago, Let Each One Go Where He May is an odyssey film at once grounded and hallucinatory, shot by director Ben Russell and DoP Chris Fawcett in roaming 16mm. Its opening shot, ten minutes or so in length, observes the two brothers burning and tending to some brush by a river in long shot; it establishes spatial terms with a stubborn stillness only to make the sudden leap into a fluid backwards Steadicam movement appear all the more audacious.

Challenging its own title, Russell’s film – staggering in its visual depth – follows its travellers like an overly loyal dog, seemingly uninhibited as it joins them on public transport and crawls along a busy street, only to be left behind when one of the brothers finally alights and the other gets into a taxi and retreats too far ahead of us, before he is found again in the next scene: the cut from one shot to the next allowing temporal and spatial manipulation, restoring authorial control to the director. But the beauty of these scenes stems from their blatant choreography. Sprawling so as to seem improvised, each shot is actually the result of a rehearsal of some kind: directed by Russell, neither Pansa brother is free to go where he may. 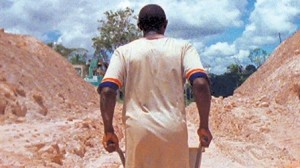 Every cut between the film’s thirteen self-contained scenes comes as a ferocious interruption. And within the scenes themselves there seems to be a steady increase of something suggestive, something resembling a contained violence desperate to find a voice. Unnamed and wordless throughout, the Pansa brothers strut with a masculine purpose even though their destination is never explained (like a gallery piece, exposition is given by way of explanatory synopses outside the work itself).

Indeed, the duo’s constant mobility seems to carry a great urgency, even threat. Or is it self-torment? Physically staging a migration enforced upon their people, Benjen and Monie inherit hundreds of years of historical hurt and outrage. When Benjen takes to densely framed trees with a chain saw, there’s something deeply logical in the violence suggested by his action, which he carries out in a staggered, uneven fashion. His bright orange worksuit – echoing the jumpsuit of a US prisoner – and the sound of the chain saw lend a fervour that contradicts the sometimes tentative way in which he goes about this task.

What Matthew Flanagan calls “a cinema of walking” reaches its pinnacle here. Half-aware of the onus placed on them as the film’s subjects, Monie and Benjen command the frame as the camera circles, follows, moves in front of and slyly observes them. Its persistence of vision – what Stephen in Joyce’s Ulysses refers to as “the ineluctable modality of the visible” – is sustained and self-probing, providing a complex articulation of historical re-enactment as a means of retroactively understanding our roots. As with Lanzmann’s Shoah (1985), the past is not only contained in the present, but is in some intellectual sense a continual and necessarily discomforting presence in the present. It makes each moment of this weird and wonderful work highly charged.