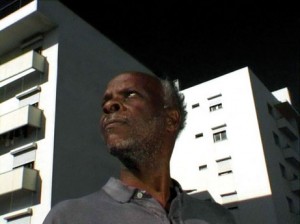 The film returns to the Fontainhas neighbourhood of Lisbon, which writer-director Pedro Costa first depicted in Bones (1997) and In Vanda’s Room (2000), and explores in particular its Cape Verdean immigrant community, seen through the jaded, worn eyes of Ventura (credited as Ventura, who presumably plays a version of himself). Dismayed by his wife’s sudden desertion, Ventura is a towering image as he lumbers into frame to lend an ear to fellow residents; absorbing their troubles and anecdotes, he cuts a striking figure of somnambulant wisdom. Figuratively referring to these people as children, Ventura sees his company reciprocated by tales, card games and the provision of liquor.

Ventura’s world is one of destitution. Fontainhas is a physical prison of concrete, its narrow alleyways and incinerated interiors shot at odd, canting angles, like some rundown reconstruction of a set from 1920’s The Cabinet of Dr. Caligari; its inhabitants struggle to fill the space around them. Texturally mesmeric, Costa’s and Leonardo Simões‘s cinematography complements its subjects’ collective misery as well as their humanity, utilising low-angles to empower them and wide-angle lenses to emphasise their physical oppression, with the inhuman architecture to which their own labour has contributed now another means by which their poverty is ensured. 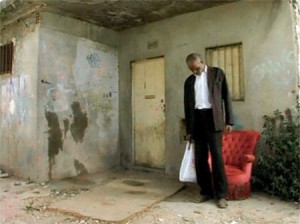 Against such unforgiving backdrops, the propertyless find themselves dispossessed further: in a rare scene in which greenery is visible, Ventura tells of how he helped build the grounds on which stands an art museum – from which he has just been escorted. In another scene, he views a brand new apartment in a glisteningly white housing project, to which he is belatedly being relocated following the demolition of his current home; as he moves from one room to another, the watchful estate agent wipes clean the walls Ventura has touched.

Moments like this are more gestural than realistic. And, eschewing conventional causality as a whole, the film presents its characters’ predicament in an original and engrossing mix of the theatrical, the photographic and even the painterly. Far removed from the fashionable miserablism of filmmakers such as Alejandro González Iñárritu – whose Babel won him the Best Director award at Cannes the same year as Colossal Youth competed in the Official Selection – Costa’s approach seems equipped to get to the essence of his subjects’ personalities. From the film’s opening shot – in which, like a more urgent version of a scene from L’Age d’Or (1930), furniture and other belongings are thrown out of a window – it shows that when dealing with the dispossessed, cinematic possibilities are not limited to the literal.

Resisting challenges of humourlessness or exploitation, Costa affords his performers space enough for their dignity and warmth to come through. In the first of several scenes in which Ventura visits his friend Vanda (Vanda Duarte, the subject of In Vanda’s Room), the pair chat over the low volume of a television. Vanda relates the story of her giving birth years prior with such energy and self-effacing detail that it’s impossible to imagine it as the result of anything other than the performer borrowing from her own experience. Likewise, her momentary fascination with a wildlife programme on the TV appears authentic. There’s a tragicomic element at work here that seems inherent to the material, and which is complemented by a style that might be described as beautifully ugly.

When it screened at Cannes in 2006, Colossal Youth caused confusion and walkouts in the hundreds. Whatever critics’ reasons for that, the film seemed more at home in the film programme of AV Festival six years later. Seeing it on 35mm at Newcastle’s Star and Shadow Cinema last night, with a short follow-up discussion with several audience members apparently familiar with its locale, added much to the film’s fascinating texture and dreamlike ellipses.