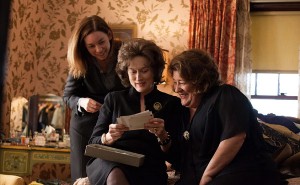 A delicate, intimate family drama like this would have to primarily depend upon the talent of it’s cast and thankfully John Wells adaptation of the play by Tracy Letts (who also wrote Killer Joe) is filled to the brim with some of the most sublime acting in Hollywood today. Wells’ film, August: Osage County, tells the story of the Weston family and the strong willed women who run the show. Starring Meryl Streep, Julia Roberts, Margo Martindale, Julianne Nicholson & Juliette Lewis (and that is just the women), August is a portrait of wonderful power play between the generations.

Throwing the audience directly into the deep end, Beverly Weston (Sam Shepard), the families patriarch is seen hiring a housekeeper to ensure the constant running of household and to make sure nothing is forgotten. Enter Streep as Violet Weston, a somewhat hideous woman made worse through pity, sorrow and self regret. Violet has throat cancer, but by no means does this mean she doesn’t have a voice on her; she interrupts the job interview, completely misunderstanding the reason for having another woman in the house. She think this is because her husband wishes to have something to look at in the house, but unknown to her is that he has bigger plans. 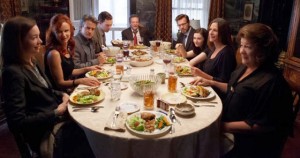 (Lewis) join her at the family home, where most of them have left to get on with their lives except for Ivy, who alone has remained close to care for her parents. Their father has disappeared and so Violet has beckoned their returns, especially Barbara, the prodigal daughter, who has a tempestuous relationship with her mother at best and a vague, unspoken relationship with her father. The women are joined by the men in their lives; Mattie Fae first comes with her husband, Charlie (Chris Cooper) and later by her son, Little Charles (Benedict Cumberbatch). Barbara comes with her soon to be ex-husband, Bill (Ewan McGregor) as well as her daughter and Karen comes with the latest beau in a long line of losers, Steve (Dermot Mulroney). At first the discussion is pretty decent, surface worries but nothing too intense but when the family hears news that Beverly has killed himself, secrets are revealed and moods take a turn for the worse. 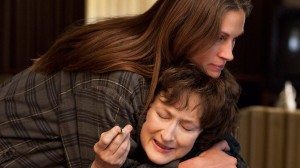 Wells’ filmmaking is so that he expertly examines the intense frustration of almost every character in the film, they each have issues with someone else around them, but as the saying goes, you cannot choose your family. His camera carefully grows more and more intimate with the characters on screen, until the audience feel voyeuristic about the entire affair and are forced to feel as if they are watching something that should be entirely private. This is his other joy, the private sphere has totally come alive in August, inviting the audience to feel the same pain and worries as the characters themselves.

Furthermore, it would be silly not to suggest that the power of August is because of the performances; especially from Streep and Roberts; both of whom manage to bring a little hint of humour to this otherwise dour affair. In particular, a scene towards the end of the film when most of the family has already left, Barbara and Violet are eating lunch, which the latter has no interest within. But to her daughter, it is important that she eats. On top of this, Ivy is about to reveal to her mother that she is having an affair with her cousin, Little Charles, despite the fact that Barbara has recently found that Little Charles is in fact their half brother as Beverly had, had an affair with Mattie Fae. Barbara is trying so hard to not let this conversation happen and instead tries to turn the women’s interest to the fish at the table. The conversation quickly turns into a comical scream-a-thon between the women as she turns around and exclaims, “JUST EAT THE FUCKING FISH!” The talent of Roberts is such, that she knows where the line between drama, frustration and pure mockery lay; she screams these words with such power and esteem that although the situation is funny, the audience quickly fall back into the drama of it all.

The other wonderful performance, is from Meryl Streep who brings to life the most horrid of women and yet by the end, 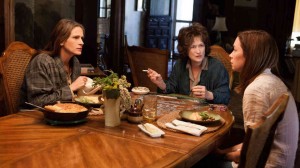 the audience are left with a sense of sympathy for this person, who effectively has pushed her entire family away from her. At another point in the film, she talks frankly with Ivy and Mattie Fae about what happens when women get older. She is so sure that they just simply lose their beauty and that Ivy had better make the most of what she has, because she isn’t getting younger. Violet is so interwoven in her thesis that she can’t see any other option; she has given up hope with her own failing body and believes that is surely mustn’t just be her but is the same with every woman!

August: Osage County is a little film with a big heart; whilst it remains melodramatic and melancholic, there is never one moment when it seems insincere or uninterested in the bigger picture. The performances are powerful and mighty, whilst the concluding moments when Julia Roberts finally gives up with her own mother and sets off onto the road are just heartbreaking. The film talks frankly about our relationships with our family and isn’t afraid to be as frank at Violet. A tantalising story, filmed in a beautiful way.