A Change in the Weather Review

It starts with an interrogation. Lydia (Anna Mottram) sits, isolated in the middle of the wide frame, answering questions thrown to her by off-screen voices. Is this real or performance, truth or fiction? A film centred around an older couple that isn’t chasing the grey pound with jaunty pensioner larks or an ageing assassin A Change in the Weather chooses a much riskier route: reality and all the quiet complications that can bring. 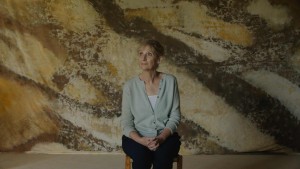 The couple here are Lydia and Dan (Bob Goody), a theatre director and his wife and collaborator. They have come to the idyllic French countryside to create a new theatre piece about a successful author and his wife who is to be played by three different actresses (with Lydia the eldest incarnation). Their process involves a series of ‘hot-seat’ interviews, where characters are developed by the actors themselves through question and answer sessions. This is Vanya on 42nd Street territory, where the line between character and actor blurs leading to the inevitable question from Lydia, “Who are we now?” This question becomes further charged by the memories and dreams that haunt them, presented here with straight forward clarity.

The parallels abound with actors playing actors improvising their dialogue and a lead who also happens to be the director Jon Sanders partner and collaborator. But Sanders approach is clear-eyed and rigorous, always avoiding the indulgence such a set-up can encourage. That rigour applies to the visuals too with scenes playing out in extended takes that quietly observe. The formal restraint resists the dramatic cut but it succeeds in drawing you in, making you lean into the screen as if to climb into this beguiling world. 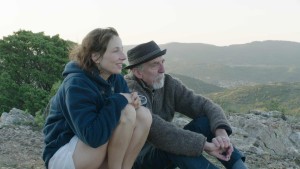 Maxine Finch and Meret Becker are the other actresses playing the authors wife at younger ages. They show different attitudes to the author character and to Dan himself. Meret Becker adds an unpredictable kick to proceedings, breaking the hush with her knockout singing skills. The music is as subtly bold as the rest of the film with the composer Douglas Finch a character who performs live or sits observing, poised at his keyboard. This means the music seems to come from inside the film and inside the characters, a bubbling wave of emotion waiting to crash.

The opening interrogation mirrors the film as a whole, for what we have here is an interrogation of character, a dismantling of a married couples facade until what seemed from afar like a monument is revealed as merely ruins crumbling into the landscape. Despite the play within this is real cinema.

‘A Change in the Weather’ is released on 7 July