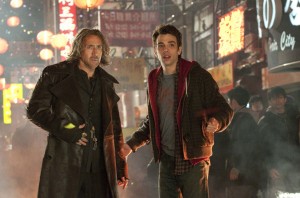 Although The Sorcerer’s Apprentice is set in the present, it begins with a prologue; telling the tale of how one of Merlin the Wizard’s apprentices, Morgana, turned to evil, but was captured by apprentice Balthazar Blake (Cage) before she could destroy the world. Centuries later, Blake is waiting for Merlin’s successor to appear and defeat Morgana once and for all. Dave Stutler (Baruchel) is a NYC physics student who, unnbeknownst  to him, is destined to become Blake’s apprentice and defeat Morgana.

The Sorcerer’s Apprentice is a harmless family film, with Disney presumably hoping for another franchise off the back of successful magical films like Harry Potter and the Narnia series. The plot is certainly not as in-depth as these series but it’s still a perfectly enjoyable film. Most of the action is CGI magical effects, rather than any real plot or battles, but the CGI is high quality so the film certainly had the effects budget to match its stars cast. This does make the film seem slightly cheap (in that not much really happens), and the brief story about Baruchel trying to woo childhood sweetheart Becky (Teresa Palmer) feels rather tacked on and irrelevant. 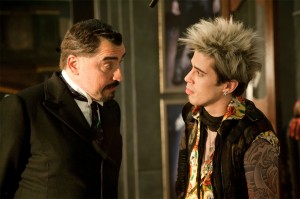 Nicolas Cage is perfect as the old and dusty wizard as the counterpart to Jay Baruchel’s geeky teen Dave, and he fulfils the comic potential of jokes about his age very well. Baruchel is most known for his work in teen comedies like She’s out of My League, and  he branches out into the family film here with no problems, even if he is still playing essentially the same character. It’s Alfred Molina however who makes the film most enjoyable to watch. Playing one of Morgana’s associates Horvarth, who is trying to chase down Blake and Dave, Molina is fabulous at playing the evil, snide villain. He also gets a great sidekick in Toby Kebbell as a wizard turned celebrity magician, where the script has some fun with a satirical look at celebrity status.

Given the lack of the usual torrent of summer kid’s blockbusters films, The Sorcerer’s Apprentice is a good choice to entertain the kids with, and there’s plenty of humour for the adults to enjoy. A good choice to watch this summer.