The story behind The Quiet Ones: the real-life Philip experiment
Home
News

The story behind The Quiet Ones: the real-life Philip experiment

Horror films are often based on creepy events throughout history, but The Quiet Ones is the first to be based on a strange psychological experiment and comes to Blu-ray and DVD August 18.

In 1972, a team of Canadian parapsychologists set about attempting to create a ghost in an effort to prove that the supernatural is produced by the human mind through expectation, imagination and visualization. 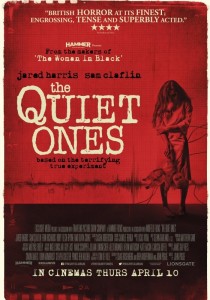 World-renowned expert on poltergeists Dr A.R.G Owen led the experiment, in which a ‘ghost’ was made-up complete with name and life story. They called their ‘ghost’ Philip Aylesford and gave him a tragic and detailed story, involving playing an illustrious role in the Civil War and having an affair with a gypsy girl, which led to his untimely death at the age of 30. After a few weeks of trying to contact Philip in a séance, he finally answered.

The team communicated with Philip by asking him to tap yes or no on the table, he occasionally even turned lights in the room on and off, made sounds in various corners of the room and levitated the table.

Philip answered questions correctly about his fictitious history, but was unable to provide information outside what the team had conceived. He did however give historically consistent details about people and events at the time, although the scientists theorised that this most likely came from their collective unconscious.

Conclusions regarding the Philip experiment range from believing that the team made contact with a playful spirit who took the opportunity to act as the fictitious character and produce the extraordinary psychokinetic phenomena witnessed, to discussing how our minds can often be responsible for strange inexplicable events, and even just stating that it proves that ghosts don’t exist.

What do you think?

The Quiet Ones comes from legendary horror producers Hammer. Inspired by the true events of 1972’s ‘’, The Quiet Ones provides a chilling and disturbing tale. Professor Coupland along with a team of university students attempt to conduct an ‘experiment’ on Jane Harper, a young girl who harbours unspeakable secrets. Professor Coupland is determined to prove that Jane’s affliction is nothing more than negative mental energy, which can simply be removed and the scientists set about on the experiment to prove their theory and ultimately free Jane. What dark forces they uncover are more terrifying than any of them expected.