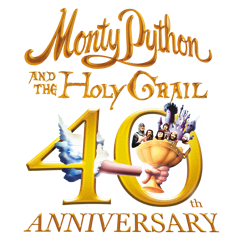 To celebrate the 40th Anniversary, Monty Python and the Holy Grail will be shown in UK cinemas nationwide for one night only on Wednesday 14th October 2015 accompanied by a specially filmed, exclusive introduction from The Pythons.

This coming Wednesday marks the 40th Anniversary of the release of the legendary Monty Python film, Holy Grail.

Commenting on the release of the film and accompanying documentary featuring a sing-a-long element, Michael Palin said, “It’s almost unbelievable to think it’s been 40 years since the Holy Grail was made.

“I have many memories of the film, largely governed by the lack of money. The army was almost entirely students from Stirling University. We just sort of back lit it, gave them some rags (those that didn’t have rags already) and we used to stop people in cars going up through the village of Doon and say ‘Excuse me would you like to be in the army for a day? We’ll give you your own rags and a spear and you can be in a Monty Python film’. And most of them put their foot down and shot off up to the Highlands. 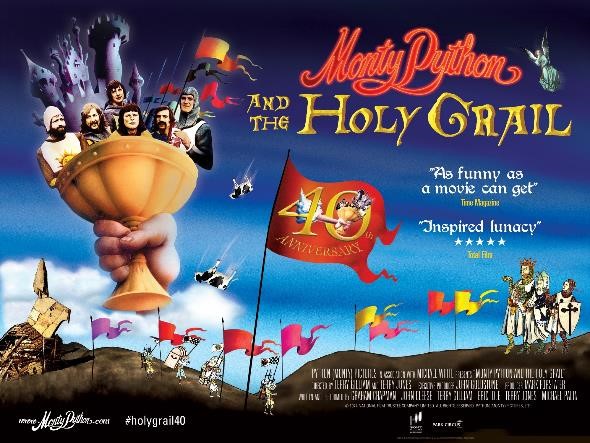 “I think there’s something about the Grail that’s just essentially, and quite blatantly, silly. And I think silliness can last, which gives you some hope for the world doesn’t it?”

John Cleese added. “I can remember nothing about the film itself. My main recollection of making the film was total physical misery. We were on the Scottish hillside and every morning we would get up and put on this knitted string chain mail and then 20 minutes later it would only rain, lightly, but it would rain for the rest of the day. And then at the end, there was the great race to get back to the hotel because it was a very small hotel and they didn’t have much hot water!”

Co-director Terry Gilliam stated, “It was our naivete, our innocence that made it possible because Terry and I wanted to be Film Directors and so suddenly we were Film Directors! We just leapt into it not knowing we couldn’t do half of the things we actually succeeded in doing. And so it was a constant, you could say a ‘learning experience’ (we like to be positive about things), but it was more like a nightmare.”

While Eric Idle joked, “I think this film is a really funny film. It’s my favourite Python film. I think it might have made a rather good musical.”

The one night only screening on 14th October 2015 will be accompanied by a specially filmed, exclusive, introduction from Terry Jones, Terry Gilliam, Michael Palin, Eric Idle and John Cleese.

Monty Python and the Holy Grail will be re-released in 500 UK cinemas for one night only on Wednesday 14th October 2015 with a brand new sing-a-long version. For bookings please visit: www.parkcircus.com