Richard Zanuck, film producer and son of Hollywood mogul Darryl F. Zanuck, died of a heart attack on Friday at the age of 77. Zanuck founded The Zanuck/Brown Company with producer David Brown in 1972 after being fired from 20th Century Fox by his father. It was with this fledgling company that Zanuck went on to produce some of cinema’s most successful films. 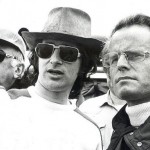 Together with Brown, Zanuck produced Steven Spielberg’s earliest films, such as The Sugarland Express and Jaws, the latter of which was nominated for best picture. Spielberg said of Zanuck – ‘He taught me everything I know about producing. He was one of the most honorable and loyal men of our profession and he fought tooth and nail for his directors’.

Zanuck’s skill as a producer did not go unrecognised, and in 1989 his film Driving Miss Daisy won the Academy Award for Best Picture. With over thirty films under his belt, Zanuck was a tenacious producer and his death will come as  a blow to many of today’s Hollywood directors.