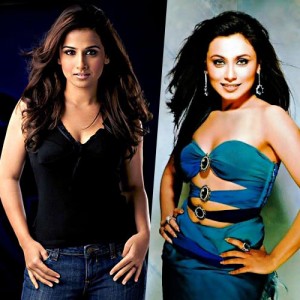 competition that they don’t even acknowledge each their co-stars.

Rani Mukherji and Vidya Balan are co-stars for the upcoming film “No one killed Jessica”. The inside rumour is that the both don’t seem to be talking to each other at all. Infact, Rani prefers to talk on the phone with her mother rather than even glance over to Vidya Balan. Apparently, the only time they make any advancement towards each other is when they are in front of the camera, after which they walk off in different directions.

In Rani’s spare time she likes to give her input to the director, which she has always done and is much appreciated, but not with Vidya this time, she feels undermined and the need to compete with Rani.

Rumours have it that Rani is very possessive over this film as it’s the only one she has going at the moment, maybe she doesn’t want anymore projects at the moment, why would she, she’s a very successful actress, but then what’s with the controlling nature?!