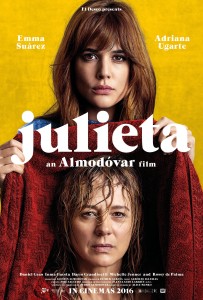 Starring EMMA SUÁREZ as Adult Julieta and ADRIANA UGARTE as Young Julieta, JULIETA is written and directed by Spanish auteur PEDRO ALMODÓVAR and is based on the short stories Chance, Soon and Silence by Alice Munro.  JULIETA will be released in the UK on 26 August 2016 through Pathé and screens In Competition at the Cannes Film Festival on 17 May.

Julieta is a teacher of fifty five. She writes a long letter to her daughter, Antía, trying to explain all the things she has kept secret from her over the last 30 years.  When she has finished her confession, she doesn’t know where to post the letter. Her daughter abandoned her when she was eighteen and Julieta hasn’t heard from her in the past twelve years. She has searched everywhere, but now realises that Antía has become a total stranger to her.

JULIETA is about destiny, guilt complex and the unfathomable mystery that leads some people to abandon those they love, erasing them as if they meant nothing.  It is also about the pain that this brutal desertion provokes in the victim.

Writer/Director Pedro Almodóvar is one of Spain’s most celebrated filmmakers with numerous accolades to his name including an Academy Award®, four BAFTAs, numerous Goyas and over 100 further wins and nominations. His credits include Volver, The Skin I Live In, Broken Embraces and most recently I’m So Excited! JULIETA is produced by Ester Garcia (The Skin I Live In, Volver) and has an original score composed by Alberto Iglesias (Tinker Tailor, Soldier, Spy and The Skin I Live In).

JULIETA will be released nationwide on 26 August 2016 by Pathé