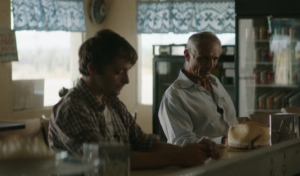 David Altobelli has made his directional debut in the short film world with ‘Independence’, a story about the passage of time suspended in no-man’s land America.

‘Independence’ is the first in a series of commissioned pieces released as part of The Shorts Series presented by Grolsch FilmWorks for 2013. Returning after a successful inaugural year, Grolsch Film Works has deepened its commitment to the world of film, commissioning the making of a number of short films from emerging international industry talent.

Altobelli is a noted music video director and member of The Directors Guild, having previously worked with the likes of Yeah Yeah Yeahs frontwoman, Karen O and HEALTH. Director of photography Larkin Seiple joins him on ‘Independence’ with a roster of work including videos for Rihanna and Bon Iver.

Moving over to the new medium of short film, ‘Independence’ follows Trent, a young man with a troubled family life, who meets a mysterious companion at the remote diner he finds himself in after his car breaks down in a town, called Dependence.

“The film plays out like a song on the piano in front of us, transporting us somewhere unknown and then returning to a familiar place.”

In addition to releasing further commissioned short films over the next year, Grolsch Film Works is also hosting a worldwide open submission film competition – The Shorts Showcase presented by Grolsch Film Works – to offer a platform for grassroots talent. Prizes for winners include the chance to be nominated on behalf of Grolsch Film Works at the 2014 San Francisco International Film Festival and promotion on GrolschFilmWorks.com.

The Shorts Showcase competition is ongoing; entrants can visit GrolchFilmWorks.com for more information and to see the first winning film from Yulia Nowicz.