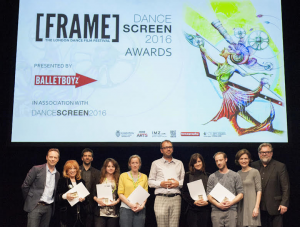 The winning filmmakers for this year’s dancescreen competition were announced at the closing night award ceremony on 12th June of London’s FRAME Dance Film Festival at Rose Theatre in Kingston Upon Thames.

Launched in 1988 and administered by Vienna based IMZ Music + Media Centre in Austria, the dancescreen competition offers a bi-annual platform for international dance films with awards chosen by a specially selected jury of professionals across the fields of film, TV, dance, and video.

There were nine awards with six competitive categories and three cash prizes for Best Student Film, the FRAME Muybridge Award for Technical Innovation and the overall Best Film of the festival with work from all competing categories eligible.

The winning film is: THE WAKE (Ireland) Dir: Oonagh Kearney Chr: Cindy Cummings in collaboration with director and cast

dancescreen (Student) Award, with a cash prize of £500

THE MUYBRIDGE AWARD FOR TECHNICAL INNOVATION, with a cash prize of £1,000

Many of the winning filmmakers were present to accept their awards with over 50 filmmakers in attendance throughout the festival from across the globe including South America, Russia, USA, Canada, Europe and many based in the UK.

The awards ceremony, was followed by a special live performance by BalletBoyz, All The Best Bits, featuring audience favourites from their repertoire and Fiction by Javier de Frutos from their latest show Life.

Frame Dance Film Festival presented by UK’s pioneering dance company BalletBoyz in association with dancescreen, screened 122 films with 11 World Premieres, 8 International, 4 European and 28 UK Premieres amongst the new work. Kyle Ridelout’s Eadweard provided the opening night film and classic dance films across the decades for all ages led by a celebration of Gene Kelly played to enthusiastic audiences at various venues across the town including Odeon Cinema, Wow Café and Bentall’s Store.

Kingston First offered public support which enabled the festival to expand many community events such as free outdoor dance classes with Big Dance Bus, Whirlygig Cinema’s world premiere of their Consequences performance piece in collaboration with The Cabinet of Living Cinema and Kingston University, and Oreet Ashery, in association with Stanley Picker Gallery, premiering the last film in her Genesis web series during her popular masterclass.

Summarizing the achievements of the festival, BalletBoyz Michael Nunn and William Trevitt, Artistic Directors for the Festival said: “We are delighted with the public and industry response to the first edition of FRAME: The London Dance Film Festival. It was great to see and share such an interesting and diverse range of films and to welcome so many film-makers from around the world to Kingston. We are already making plans for next year!”