A native of Budapest, Bordos debuted as a VJ in the famous underground parties of the city. Bordos.ArtWorks has become a pioneering collective of its kind in Hungary, but also internationally recognized as a leading figure of video mapping. 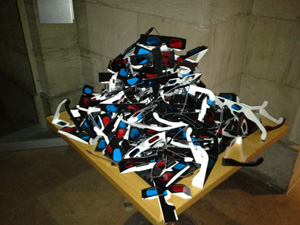 Apparati Effimeri works in the visual design field, experimenting the chance to create new binds between vision’s past history and visual art’s new techniques and contemporary approaches. The project was born in Bologna in 2008 with the intention to actualize the idea of celebration’s apparatus. In the past, the “ephemeral apparatuses” were made to measure for the event to be celebrated and would seduce through “visual symbols”. Motions, sounds, lights and images specifically created by great artists would modify the city streets for a few days. In the track of this tradition, Apparati Effimeri intervenes in a non invasive way, giving life to the pre-existing shapes. The architectures become at the same time active screens for video projections and the subjects of these. The purpose of the collective is to change the perception of spaces. The work of Apparati Effimeri adopts this approach to create binds that pass crossways through the history of vision. This methodology of intervention allows great experimentation and always new possibilities. Their first works were born in the underground scene of Bologna: in the settings of digital arts festivals, between 2007 and 2008, they would experiment new visual displays that would play along with the performances of soundartists. Since then their research has been precisely taking shape, becoming a recognizable language, characterized by a meticulous analysis of the locations in which it acts.

SIGMASIX experiments in the fields of visual creation. Its members make music videos and custom experimental installations for customers large and small. They see the future like a playground, trying new technologies and new ways of mixing different kinds of media.

Sigma6 is Eric Morzier and Florian Pittet. The two graduated from the University of art and Design in Lausanne (écal).