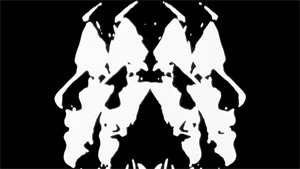 Another gem of a screening as part of the BFI’s Days of Fear and Wonder Sci-Fi season, curated and introduced by Stuart Heaney and William Fowler.

Many of the artists and filmmakers featured were part of the West Coast art scene, and some of who went on to create visual effects, or saw their work influence the likes of 2001: A Space Odyssey, The Empire Strikes Back and The Right Stuff.

This special screening was a presentation of their rawest, rarest and earliest work. Vivid, pulsing and psycehdelic films from as far back as the 1950’s.

Drawn entirely by hand on small filing cards over a period of ten years! The premise was to design an instrument to curb the psychic forces relating to Yoga by concentrating them on a pattern.

One of the most well known names from this showreel, Jordan Belson always created works as heliocentric, where as most other others are geocentric. Momentum is a calm, objective experience of imagery that appears to suggest abstract concepts without becoming overly symbolic.

Whitney’s demo reel of work created with an analog computer/film camera magic machine that he built from a WWII anti-aircraft gun sight. The techniques he developed with this machine were the inspiration for Douglas Trumbull (special fx wizard) who used the slit scan technique on 2001: A Space Odyssey.

The film takes it title from the high-speed emulsion on which it was filmed. O’Neill photographed oil pumps and their rhythmic sexual motions, and geometrical graphic designs on rotating drums whilst simultaneously zooming the camera in and out. This base vocabulary was then transformed at the editing table using techniques of high-contrast, bas-relief, positive/negative bi-pack printing and image ‘flopping’, a Rorschach like effect, where the same image is superimposed over itself in reverse polarities.

Screen shots from this film were the main promo for the event and seeing the film it was easy to see why. For many of the crowd, this piece was the highlight of the evenings showreel.

A semi-abstract film that uses space imagery and the technique of film-video mixing to visionary, psychedelic effect.

Recalling imagery of distant galaxies obtained by radio telescopes as well as visions obtained through spiritual or hallucinogenic exploration. Excerpts were used in Gerry Anderson’s film Journey To The Other Side of the Sun (1969)

OffOn was one of the first examples in which film and video technologies were combined. The nine minute film combines a number of video loops which have been altered through re-photography or video colorization, and utilizes an electronic sound track to create its unique effect.

In 2004, the film was selected for preservation in the United States National Film Registry by the Library of Congress as being “culturally, historically, or aesthetically significant”.

Combining computer graphics with live action photography to create a new reality. A haunting yet beautiful piece of work.

The images were built around the central theme of the first moon landing, which was still two months away when he finished the film. The image of the moon does not actually appear in the film. Bartlett also worked with experimental television and at one point envisioned creating an underground network of experimental television stations funded by rock groups. Later, he produced special effects for Hollywood films like Dune and Altered States.