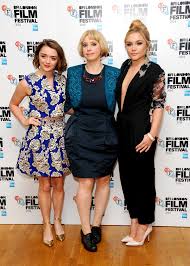 Having been nominated for Best British Newcomer at the 2014 BFI London Film Festival, the future is bright for 19-year-old Florence Pugh.  I caught up with her to discuss her breakthrough role in Carol Morley’s The Falling.

[FRR] Could you tell me a bit about your character in ‘The Falling’?

[FP] I play Abigail Mortimer, who is the popular leader of the friendship group in a boarding school in 1969, and she is the first to step away and experience her sexuality, she’s the first to give in to her hormones – this is the thing that spirals the friendship group out of control, and this is the thing that breaks her and her friendship with Lydia Lamont (Maisie Williams).  So it’s a pivotal moment when she decides to step away.

[FRR] What was the auditioning process like for you?

[FP] It was obviously a very terrifying one.  Throughout the whole time I never really believed anything would come of it, because you know, it’s a big film, and I’d quite literally just sent in a tape of me talking about myself.  My brother is in the business so I’ve been watching him for the past couple of years and I know exactly how it works, and I know that the audition process is quite mean, it wants you when it wants you, and the moment it doesn’t want you that’s it – you won’t hear anything back.  My mum always tells me, each audition you do, just let it go, don’t think of it, don’t think you’re going to get it because there’s no point because at the end of the day you probably won’t  – it’s just good to do it.  So each recall, each tape that I did, I’d completely forget about it afterwards – I’d have to, it was the only way to stay sane!  So when I got to the finals of it and I started to do test read-throughs with Maisie Williams, it was a little bit exciting and terrifying.  But it’s an experience I’ll always hold dear to me as it was my first experience of this business.  And it was a lot of fun.

[FRR] What was it like being directed by Carol Morley?

[FP] Well, Carol Morley has been like a mum to me.  She has this air about her, she just loves everyone, she treats everyone the same – no matter how stupid your question, no matter how annoying you are – she will always treat you with the same respect she treats everyone else with.  And that’s a really refreshing thing to have, on a film set where there are so many people working around you, and it was really a truly amazing experience to have her because she is the most generous person you will probably ever meet.  And so doing things like press with her is a joy because it means I get to hang out with my favourite person.  It was a really great set-up and I’m realising that more every single day.

[FRR] And how did you find acting opposite Maisie Williams?

[FP] Wow.  Well, Maisie Williams was an actor I always knew about from Game of Thrones, so when I met her it was quite a daunting moment because, you know, there’s Arya Stark sitting right in front of me!  But I got to work alongside her and I really got to be friends with her which was amazing because from a kid who’s been in this industry since she was, what, thirteen, she’s learnt a lot and she’s seen a lot, she knows how things work, and it was just really cool to be able to sit back and watch her.  She’s seen it from a kid’s perspective and she’s now grown up to be an adult, and it’s quite nice to know that she’s done it for so long and she’s done it with such an amazing air about her – to learn from her was a joy. 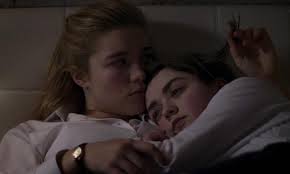 [FRR] And similarly, to learn from some of the amazing older actors in the cast?

[FP] Yeah, definitely.  In my first week I got to work closely with Greta Scacchi – Greta is someone my mum told me about before I’d done the audition, she kind of gave me the low-down about her and told me about her career, etc.  So when I got to work with her, it was amazing to be around someone who hasn’t been affected by being a star, she was just as generous with her acting with me as she was with the older women that were doing scenes with her.  I got to do some really, really cool long-day shoots with her, and she is such a great and majestic woman – she is incredible! And just the fact that she can expose herself as that character was amazing to watch.  So yeah, working with Greta and Maisie on my first week I was like, how has this happened?

[FRR] How would you explain the theme of the film – Mass Psychogenic Illness – to people who don’t really understand what it is?

[FP] It’s basically best explained by the film.  Mass hysteria is passed through one leading person – the amount of research Carol did on this was amazing – so in this case Abbie is the starter of it all, she is the one that has the real problem, she is really ill.  It always starts with one leading figure that people look up to, so creating that in a script was great because it meant we had all these girls gossiping and giggling over this popular person… It’s this illness where you faint and you fall, you don’t necessarily have anything wrong with you, it’s just the sensation of believing you do.  Doing that on set was incredibly knackering, we had to faint all day every day – just fall on cue – and had to keep our heads in that emotional turmoil whilst we were working… and, you know, we’re only kids! You’d wake up at four and be on set by six, it was very straining; but incredible at the same time, it was just one lesson after another and that’s where I got my true understanding of what it’s like to be on set.  I just realised how demanding it is, and how much you have to deliver in the hours that you are working.  People ask you what the difference is between film and theatre; my answer is that they are both as strenuous as each other, it’s just that one of them you have to do for twelve hours a day!

[FRR] So what’s next for you?  Has other work stemmed from this experience?

[FP] Yeah, I’ve actually just got back from America from filming a pilot which was awesome.  It’s called Studio City, and we’ve yet to know if it’s going to be picked up or not, so I’ve just been away for two months filming that.  It was an amazing experience and it was so different from The Falling, but wonderfully so, and I also got to sing and play guitar, which are all the things I love most so it was great.

[FRR] Are there any actors or actresses whose work you admire and whom you aspire to follow in their footsteps?

[FP] I don’t know how, but my name has been mentioned in the same sentence as Kate Winslet – it’s so weird and I don’t know how that happened but I adore her so much, she’s incredible, she is my idol in every single way. I think Anna Kendrick is absolutely gorgeous and fabulous.  Felicity Jones, she’s absolutely beautiful, I love her so much – I loved her in Like Crazy, she’s someone who I’ve always aspired to be like because she’s so natural in everything she does, it’s literally like you’re just filming her, rather than a character.  Something I’ve always wanted is to have someone talk about my talent in that way, it’s something I will always work towards. 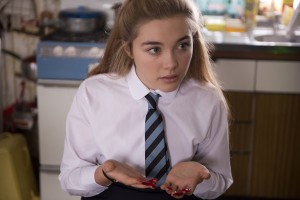