Ennio Morricone – ‘My Life in Music’ @ The O2 Review

Thursday night saw the iconic Italian film composer Ennio Morricone, grace the stage at the O2 alongside the 96 strong Czech National Symphony Orchestra, a 75 piece Kodály Choir and a handful of soloists.

The O2, so often used for large scale sporting events, rock and pop concerts was treated to a very special evening of pure genius. Ennio Morricone presented his ‘My Life in Music’ tour. The tour which was originally planned for late 2014 was cancelled due to the great maestro injuring his back.

Morricone now at the grand age of 86 boasts over 500 TV and movie soundtracks to his legendary career over the last 50 years. Having started out with B movies, his most prolific period was during the 60’s and 70’s where the majority of high profile Italian movies were accompanied by a Morricone score.

Morricone was a classmate of director Sergio Leone, with whom he would later come to form a formidable 20 year composer/director partnership. One of the most successful in cinema history, up there with Hitchcock & Hermann and Fellini & Rota.

Highlights from the extensive back catalogue include Le Professional, The Mission, The Untouchables, Cinema Paradiso, Once Upon a Time in America and the seminal work with Leone, A Fistful of Dynamite and The Good, The Bad and The Ugly. All of which would feature on this magical evening. 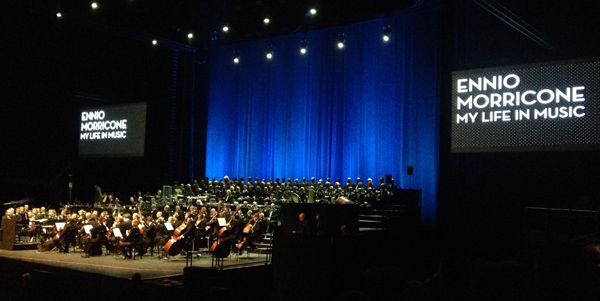 Once the stage had filled with Orchestra and Choir, Morricone strode onto the stage in black, confident and purposeful. A simple nod to the crowd, no words. He took up his position, half leaning on a chair to support him, then straight into the majestic score of The Untouchables. Somewhat strange to hear such iconic and familiar music without the visuals from the film that you so strongly associate them with but nobody could deny how extremely powerful the music is in it’s pure form. It was the perfect choice to start the show. The crowd needed no encouragement, they were in awe of the great man from the very beginning.

The second suite, a complete change to the first was entitled Scattered Sheets and featured H2S, The Sicilian Clan, Love Circle and Come Maddalena from the film, Maddalena.

The third and final suite of the first half of the performance, was for many the reason they know Morricone’s work. The Sergio Leone suite. Starting off with the playful The Good, The Bad and The Ugly theme. There was enough material with Leone to fill the entire concert with music just from the spaghetti westerns, but we were treated to the very best of the crop. Once Upon a Time in the West followed before leading into A Fistful of Dynamite. The undeniable highlight of the selection, and entire evening was the end piece – The Ecstasy of Gold. Cue the incredible talent of soprano Susanna Rigacci. Rarely will you ever hear anything so powerful in life as Rigacci belting through the octaves – holding her own against the entire orchestra. All the while Morricone in his element conducting the orchestra with sublime baton control. Live performance does not come any better than this, a true hair standing on end moment.

For anyone else, it would be an impossible task to follow such a magnificent piece. Not for Morricone.

The second half started with the beautiful Chi Mai from the film Le Professional. Not as well known by name but instantly recognisable to the ear. Next up was the two popular themes from Cinema Paradiso, the Main Theme and the Love Theme. Another riotous applause followed. The score itself conjuring images of the film itself and the relevance of both the music and film together. Somewhat poetic and poignant for this showcase of a life’s work.

The next sequence featured the music from The Battle of Algiers, Sacco e Vancetti, Investigation of a Citizen Above Suspicion, Casualties of War and Abolission from the film Quemada.

The final suite was dedicated to The Mission, the magnificent film starring Robert De Niro and Jeremy Irons at their peak. The music for the film as integral to the films success as any of his other work. The backdrop of Iguazu Falls and jungles of South America meeting perfectly with the power and and crescendo of Gabriels Oboe, Falls and On Earth as it is in Heaven.

It was almost over. Everyone expected an encore and they were not disappointed. Cries from the crowd of ‘Maestro’ and ‘Bravo’ ensured that. People wanted more and more of this musical magic before they were ready to leave. 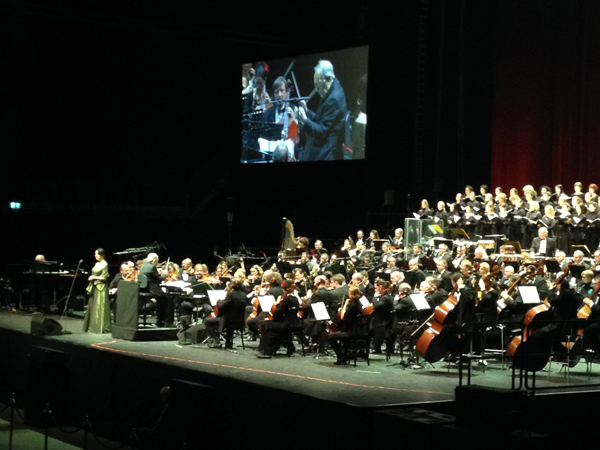 Morricone once again left the stage briefly, as he did the in the first half to escort the astounding Susanna Rigacci back to the front of the stage. A delighted crowd were treated to reprises of Ecstasy of Gold and On Earth as it is in Heaven for a second time. Once finished the entire crowd rose to their feet immediately to give a truly well deserved standing ovation. The memories of this night will last for a very long time for anyone that was in attendence.

Morricone is widely considered as the greatest living film composer although surprisingly he has never won an Oscar for any of his soundtrack work despite being nominated 5 times for Best Original Score. However he did receive a Lifetime Achievement Award back in 2007. The tour continues around Europe now and if you can, grab yourself a ticket as this is likely to be the swan song of the legendary composer.