A Beginner’s Guide to… Quentin Tarantino

A Beginner’s Guide to… is a new (fortnightly) feature to Front Row Reviews where I intend to impart some knowledge unto you readers about some of (very biased here, in my opinion) the best directors around and how some of their films work in terms of their entire filmography.

I want to be able to give a brief history of the director and then choose three of their films (Beginner, Intermediate, Advanced) to discuss. These three films, may not necessarily be (again, in my opinion) the best films but films that I truly believe aid in learning and representing the body of work by said director. For all those who need definitions, the Beginner film would be for viewers who haven’t ever watched a film by this director (a good introduction, some may say), the Intermediate would be for those viewers who have a little background but still want to learn more about the director before coming along to Advanced, which would be the films by the directors which may be the least commercial or well known, but die hard fans of the directors would have watched.

How does that sound? 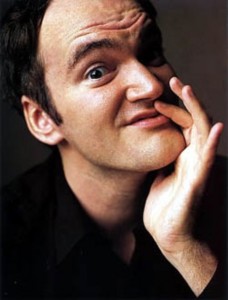 Quentin Tarantino is an American film director who also has written scripts which other directors have produced and is also sometimes seen on screen (both in his and others films) in smaller, less significant roles. In the early 1990s, he began his career as an independent filmmaker with films employing nonlinear storylines and the aestheticization of violence. Over the years Tarantino has managed to create a universe through his films where certain characters exist (and are returned to over and again) as well as a bending of the rules of the society that these characters live in. His filmography is often noted as being very postmodern as he is known to reference various parts or generic elements of films or genres of times gone by. The self proclaimed film geek, who grew up watching all the films in his local video store, saw Tarantino gain a vast knowledge of film from all around the world, and again this is seen in this films.

Lance Lawson, manager of the video store where Tarantino worked has said that he ‘read an extreme amount of thrillers and comics, loved Elvis… and always celebrated his birthday by going to the movies.’ Tarantino’s early life is reflected in a number of his films. The most notable example is in True Romance, which is arguably the most autobiographical of Tarantino scripts, probably because it was one of his earliest. In 1986 Tarantino made his first film, My Best Friend’s Wedding, which remained unfinished. He then wrote the script for True Romance a year later. His second script, Natural Born Killers, was written by 1988 and he sold True Romance in 1990 for $50,000, intending to use the money to produce his third script, Reservoir Dogs.

This is where it begins really, with Reservoir Dogs which was shown at Sundance Film Festival in early 1991 where it saw critical acclaim (how often do you see a heist film without a heist?) and it became a cult classic.

As I previously mentioned, many see Tarantino films as very postmodern. Edwin Page briefly lists what makes these films so;

Now, one can argue the distinctions about postmodernism forever (the arguments do go on) and one can also discuss how important postmodern work truly is or whether it is simply destroying a history by bringing everything into the now. But whether you prescribe to Jameson, Hutcheon, Baudrillard or anyone else, it is truly possible to see how reference and history come together in Tarantino’s films. 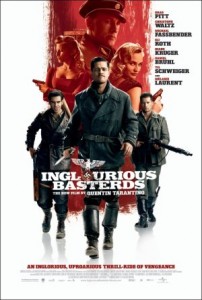 Tarantino spent just over a decade writing the script for the film because, as he told Charlie Rose in an interview, he became “too precious about the page,” meaning the story kept growing and expanding. He had described the early premise of the film as a “bunch-of-guys-on-a-mission film.” According to Tarantino, all his films make the audience laugh at things that aren’t supposed to be funny, but the sense of humor differs in each. By 2002, Tarantino found Inglourious Basterds to be a bigger film than planned and saw that other directors were working on World War II films. Depending on what version of the history you are reading, there were several points in the past 15 years that Tarantino was planning on releasing this film, but kept holding back due to other major war related releases.

In Inglourious Basterds, the audience follow Brad Pitt as First Lieutenant Aldo Raine who is tasked to recruit a team of eight Jewish-American soldiers for a mission to go behind enemy lines and bring fear to all German servicemen. He tells the soldiers that they each owe him one hundred Nazi scalps. They operate with a “take no prisoners” attitude and come to be known as the “Basterds”.

I have chosen this as the beginners film as I think it represents what Tarantino aims to show through his films (through the continual referencing, be it through image or music) and by blurring the boundaries of genre (comedy or war film or serious drama?) but it also stars one of Tarantino’s biggest Hollywood stars to date, Brad Pitt. Therefore Inglourious Basterds, on the surface looks like a much more commercial film that any other offering of his.

Here, the audience is shown the events before and after a botched diamond heist, though not the heist itself through an ensemble cast of Harvey Keitel, Steve Buscemi, Tim Roth, Michael Madsen, Chris Penn, and Lawrence Tierney. Tarantino has a minor role, as does criminal-turned-author Eddie Bunker. It incorporates many themes that have become Tarantino’s hallmarks: violent crime, pop culture references, profuse profanity, and a nonlinear storyline. 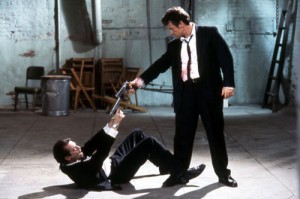 The film has become a classic of independent film and a cult hit. It was named “Greatest Independent Film of all Time” by Empire. Reservoir Dogs was generally well received and the cast was praised by many critics. Although it was never given much promotion upon release, the film was a modest success by grossing $2,832,029, which made its $1.2 million budget back.

As Page points out, there is a clear postmodern mix of ‘high’ and ‘low’ art apparent in Reservoir Dogs. Tarantino successfully uses both popular culture and traditional literary techniques, which blend extremely well to create a tense and gripping Film Noir. These literary techniques include the use of chapter titles (seen throughout Tarantino’s films) and a non-linear narrative, which can usually be found in novels rather than in films.

My intermediate choice is based on the fact that Reservoir Dogs is a prime example of Tarantino’s manipulation of time. One is never 100% sure whether they are viewing before or after the heist, but it is important that you never actually see said heist. Another technique that he uses is allowing the audience to be one step away from the characters, so although we want to sympathise with their situations (see Tim Roth), we are actually being aligned with the professional ruling as we do not know their names, as do none of them (see Mr (insert colour)), which allows the audience to simply look and view these characters as oppose to becoming emotional with them. 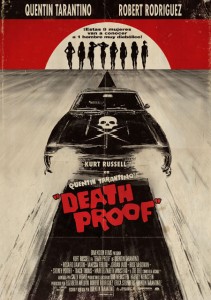 This film centers on a psychopathic stunt man who stalks young women before murdering them in staged car accidents using his “death-proof” stunt car. The film pays homage to exploitation, muscle cars and slasher film genres of the 1970s. Death Proof was released theatrically in the United States as part of a double feature with Robert Rodriguez’s Planet Terror under the collective title Grindhouse in order to replicate the experience of viewing exploitation film double features in a “grindhouse” theatre.

I should go on record now and say that possibly this is the least rated film of Quentin Tarantino’s and from a director who has quite a specific audience in the first place, this is certainly something a lot of people go by. I suppose this is why Death Proof is my advanced choice, as a film that I don’t think many except for die hard Tarantino fans will be able to appreciate. There is a definite blurring in this picture between the era in which the film is based on and the one in which the film was produced in and this can be seen due to the manipulation of the grain of film. There are various techniques that Tarantino uses to make the film look older, to make a more realistic experience for the audience watching but in the long run, unfortunately, this was not widely acclaimed as many of his other pictures were.

I would like to credit Edwin Page’s, ‘Quintessential Tarantino’, Marion Boyars, 2005

By no means is this list extensive, for the rest of Tarantino’s filmography is also exquisite and should be viewed but rather I aim to just give a brief picture of where the director is coming from and hopefully will get a few more audience member’s interested in said director.

Keep following Front Row Reviews for the latest on Tarantino and his new picture, Django Unchained, due out next year.