A Change in the Weather is Jon Sanders fifth feature film after the revisionist western Painted Angels and his improvised Kent trilogy. Once again this is a piece of defiantly personal cinema that continues his collaborative approach working alongside partner Anna Mottram to create an outline that is developed by a repertory cast and crew.

Set in the heart of French Cathar Country, A Change in the Weather looks at a theatre director Dan (Bob Goody), who brings together a group of performers to spend a week with him and his wife Lydia (Anna Mottram). As the work progresses, fiction and reality become blurred and there is a constant tension between the characters’ own lives and the nature of the work – an investigation into the changing nature of love. 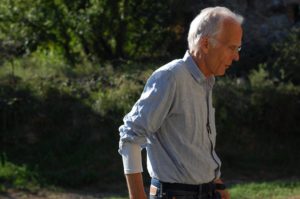 Front Row Reviews: A Change in the Weather starts with a hot seat acting exercise. Is this a technique you use as part of your process?

Jon Sanders: No, I’d never heard of it.

I remember on our last recce, three weeks before we shot, Anna and Stephen [Lowe] started to talk about hot seating which I had no idea about and then that idea just came out almost as a last minute thing and we realised, ok that’s it.

Interestingly during the Q&As we’ve had recently what we’ve figured out is that Anna’s first hot seat, which in a certain way defines Elsa, that character, put down a maker that the other two actresses had to follow. If she had done a different Elsa, then it would have gone differently, and I didn’t know how Anna would play Elsa either. And that was the beauty of hot seating because it’s not you it’s the actresses in the hot seat deciding things.

Music seems integral, with the inclusion of your composer (Douglas Finch) in the cast. How did you go about constructing the score?

We watched 8½ [Fellini, 1963] quite carefully and we realised that there was much more music in 8½ than you can remember. In it you see a lady playing the violin and then it becomes film music and I very much like the idea that music that was being developed within the film became the film music.

For instance I said to Meret [Becker] and Douglas that we needed that scene where they’re doing the song and Max is chatting up Bob on the sofa and they actually made up that song during the shoot and those lyrics come from words said in the film. “The dog is over friendly” was something that the focus puller said in a bar. But then that music that they’re practising there, and they were practising, actually becomes the final music at the end.

So the film is developing during the shoot?

Yes. That is the joy of working together whereby it is not written and there’s not a script but you’re free. Everybody is contributing massively (they’re making up their own dialogue), and so my job is to keep an eye on it and keep everything under control but to guide everybody’s creative efforts into this one thing that we’re doing. In many ways that creativity of involving lots of people can produce something quite wonderful which is the pleasure of what we’re doing I think.

I’ve got a kind of romantic idea of the avant-garde and of a group of people from different disciplines working together as they did in cubist times or more recently in America with Merce Cunningham, John Cage and Rauschenberg. I try in a way to replicate that so on our shoot we had Douglas and we had Stephen Lowe who is a renowned playwright.

Was it complex working out the camera moves to create effective master shots?

Our only problem is generally we don’t know where the actors are going to go. This was most significant in the first puppet shot where we didn’t know what was going to happen. What we did know was that Anna was going to lead that puppet from the place where they are dancing to the chair and lay him down and then he would either die or be abandoned. So then I told Seonaid, the puppeteer, Bob’s daughter, that once she was satisfied that he was dead or left, she was to turn to look at her real dad and her scene dad and that David [Scott] would have to pan around. He’s like many cameramen of his era trained in documentary and one of his specialities was dance. But even so, with tracks and [a grip] it’s pretty miraculous stuff that they’ve done. He got off that camera and I’m amazed he shot it, tears were streaming down his face. 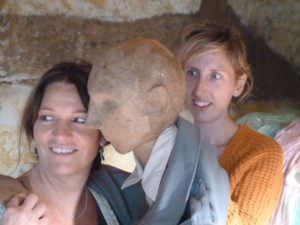 Did this approach ever frustrate you because you wanted to cut mid-way during a scene?

No, it’s part of going back in time to previous eras of artistic endeavour, and we’ve gone back to the happening, the 50’s happening. That when our actors get going we know that’s it, and the excitement is, “Are they going to keep this up or are they going to fall off the wire?” Also David and his crew and Mick, the sound recordist, and his boom swinger, have got a part of a deal, an invisible part of a deal, so everybody’s at it in that one minute, three minutes, seven minutes it’s happening and everybody’s got to be right on top of it and that gives a strange excitement which I think transferred to the final film.

So you’re creating a situation, you’re capturing something rather than creating a puzzle of pieces to put together?

Yes, I’ll give you an example: Meret in her final scene blasting Anna, there was going to be a scene were she talked to Bob about what had happened, and I thought, we don’t need to see that.

So I said to Meret, we’re not going to do that, what I want you to do is go and talk to Bob and really find out what happened, and then when you’re ready tell us and we’ll shoot it. So we set up the shot in the bed, she went and talked to Bob and we were all sitting out there chatting, Anna was in bed and suddenly, it was upstairs, I heard this rampaging scream, and I realised, “Oh my god, Meret’s not even going to tell us that she’s going to come on set” and so I screamed at the guys, “Turn over, end board!” and just as she blasted through the door the camera turned over and Abi the focus puller whacked the focus onto her and then it happened, then she ran out and we all looked at each other and thought blimey did we get it? Hahaha!

How much did you know about the play they were putting on?

We still don’t know anything about the play.

All we knew it’s a play about a rather vain idea of one bloke and the three ages of his wife, that’s what we knew and that’s all we needed to know and that he was a successful crime writer, that was it.

Was there a plan to give each of side of the couple, Anna and Bob, an interior life with Bob’s dream and Anna’s ghost?

Yes, when I was thinking about 8½, which was Mastroianni’s interior, I wanted a him and hers. What we didn’t realise, and this always happens, you don’t know how the film is going to come out. I thought we were going to make a film that was split between Bob and Anna, but in fact, and I don’t know why, we’ve made a film where it’s really about Anna. Because she’s the one that makes the decisions and he has paranoid dreams but she has a ghost, which is far more active, and she’s also the driver, so I didn’t know that.

So is your next film going to be a reaction to this or is it going to try and push what you’ve done with this further?

When we finished this shoot I thought, “Will we do anything better?” and then I realised that the direction that we should go wouldn’t be that kind of extravagance, and for us that was kind of quite an extravagant film, locations, going far away, and all that. I want us to become more internal, more to do with what’s going on in people’s minds and maybe develop the ambiguity of reality and dream and reverie further which we began to do in [A Change in the Weather] but I’m very interested in taking that further but in a simpler way.

Exactly, Persona. Strange enough before we went to film we all went down to David’s and when everyone had gone home David and I spent the evening watching Persona, I wasn’t sure why, but we did, perhaps that’s why, perhaps that’s where we’re going next.

More of a chamber piece.