Exclusive Interview with Holocaust Survivor Ed Mosberg: "...the SS ripped the child from the mother’s arm and smashed the baby’s head... If I hadn’t been there and somebody told me, I would not believe that this was true" | Front Row Reviews
Home
Features

Exclusive Interview with Holocaust Survivor Ed Mosberg: “…the SS ripped the child from the mother’s arm and smashed the baby’s head… If I hadn’t been there and somebody told me, I would not believe that this was true” 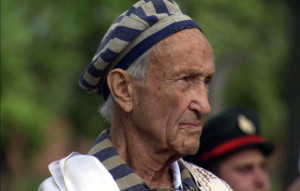 The horrors of the Holocaust are near enough impossible to transfer into words. An indelible scar in the history of humanity, new film Destination Unknown joins the ranks of indispensable documents covering the genocidal tragedy. Tracing the survival of 12 people, it is a heartbreaking testament to the endurance of the human spirit even when in the presence of unfathomable evil.

Ed Mosberg is 92. He still wears a bracelet with his number tag from Mauthausen camp. We sat down with him to hear his story and how the experiences have marked him in the years since. ‘I have no right to forgive. Only the dead can forgive’, he tells Greg Wetherall.

FFR: This film marks your first filmed involvement in talking about the Holocaust. Why now?

Ed Mosberg: Well, this one started 14 years ago, but I spoke prior to it. I spoke at different schools, synagogues, groups etc. I owe it. It has to be told.

Did you feel a pressure to talk about the Holocaust? 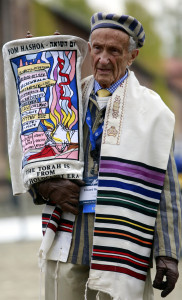 I felt no pressure from the outside, but there’s pressure on me from the inside. I lost my whole family. My wife lost her family. My wife doesn’t talk about the Holocaust. It’s very hard for her, so I have to be the one who talks so that nothing will be forgotten.

It must put a tremendous strain on you.

It does, yes, but I have to do it, because every day there are less and less survivors. If what happened isn’t told, it will be forgotten.

We cannot forget and forgive. I could not (absolve the crimes of) the deaths by forgiving; it would be to kill them for a second time. Only the dead can forgive.

That’s interesting, because I was going to ask you about forgiveness…

You’ve thought about it though?

Yes, but I have no right to forgive. Only the dead can forgive.

I remember that I was in a school once, talking to children. The children were 15 or 16 years old. One boy got up and he said, ‘when will you start forgiving?’ I walked over to him and I said, ‘If they were to kill your grandparents, your parents, your brother and your sister, would you forgive?’ That boy jumped on me. ‘I would never forgive’. I said, ‘you got your answer’.

I was interested to know about the atmosphere in the camp on a day-to-day basis with the other prisoners. Was there talk of any sort of rebellion or escape?

Let me tell you the truth. I never had a conversation during the war with other prisoners. No.

I was at Mauthausen (concentration camp) and that was not the Jewish camp. Jews in Mauthausen were in the minority. They had a lot of Italian and Spanish people there. There were also a lot of Polish people from the uprising in Poland. There were a lot of Russian prisoners of war. Also, they had a lot of Germans, because in 1933 that the Nazi’s created the Dachau (the first concentration camp) and they put all the political prisoners there. They were the intelligent people. Later, they emptied all the jails and they put the put the criminals in the same place. The criminals and the political prisoners didn’t get along. They were killing each other. Then they brought in the Jews. Both of them hated the Jews.

So they found a common enemy…

That is correct. When the guys came into the toilet… you know the latrines? They had one where about a hundred men could go in at once. Once, they saw a Jew and they pushed him in and he drowned. 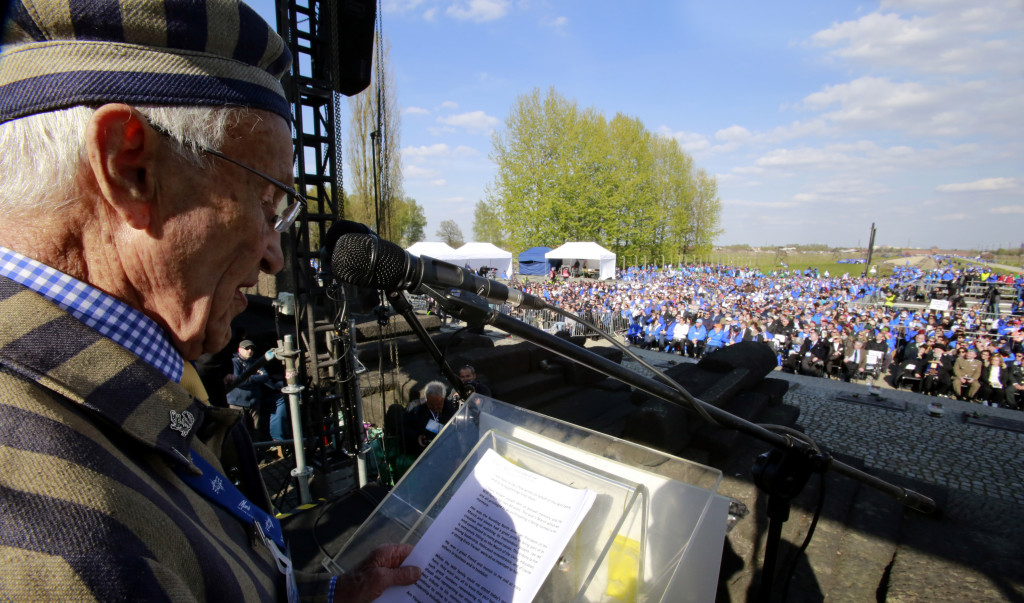 With regards to the years since liberation, did you develop a bond with other survivors?

Yes, but when the war ended, other survivors were ashamed that they had survived. My wife had a tattoo from Auschwitz. She was always covering it up so that no one could see it. I was not ashamed. I had my number all the time. This is the original plate that you see here (gestures towards a bracelet around his wrist containing a plate with his prisoner number on it). It’s from Mauthausen. Many times, people ask me, ‘what is it?’ I tell them and they tell me that they have never seen a survivor.

How do you live a life after experiencing something like that? You’re 92 now, and you’ve lived a long life, but it must have been a real struggle.

Struggle with what? With memories? Well, I have to. I have to go and talk in memory of those people who can’t talk. They are not here, so it is my duty and obligation. This is the way my life is. 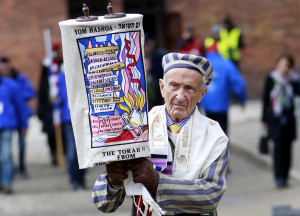 What about religion? Did your experiences draw you towards God or away from God?

I have three daughters. One is very religious. She won’t even drink water from a cup in my house. She brings her own… everything. I respect her the way she is and she respects me the way that I am. My mother was religious to the extent that, in the concentration camp, one day, I remember that I gave her a piece of meat that I found in some place. I put it in her mouth. She was very skinny. She spat it out and she said, ‘It is not kosher. I cannot swallow it.’

The next day, they took her to the gas chamber.

My two sisters and a sister of my wife, one night, they were lined up along with 7,000 other girls by the Baltic Sea and machined gunned down. The next day was liberation.

Heinrich Himmler issued an order on 14th April 1945 to all commandments of the camps not to leave anybody alive. 5th May 1945, the day of liberation, the SS took us to the mountains where they had a big case set up with dynamite to blow us up. It didn’t go off.

In another camp, a sub-camp of Mauthausen, where they had 18,000 people, on the last day they brought them into the caves – the factory was inside the caves – and they were rigged with dynamite, but the prisoners started to rebel and they didn’t go in.

On 13th March 1943, when they liquidated Krakow ghetto, a woman was carrying a baby in her arms and the SS ripped the child from the mother’s arm and smashed the baby’s head against the wall to kill it. I was there, so I testified to all of those things. Another child was hidden in a knapsack, they shot it in the knapsack. If I hadn’t been there and somebody told me, I would not believe that this was true. This is why I am going (around) talking (about it).

If there was a message you would like to give to the world, what would it be?

Destination Unknown is in cinemas from 16 June 2017. 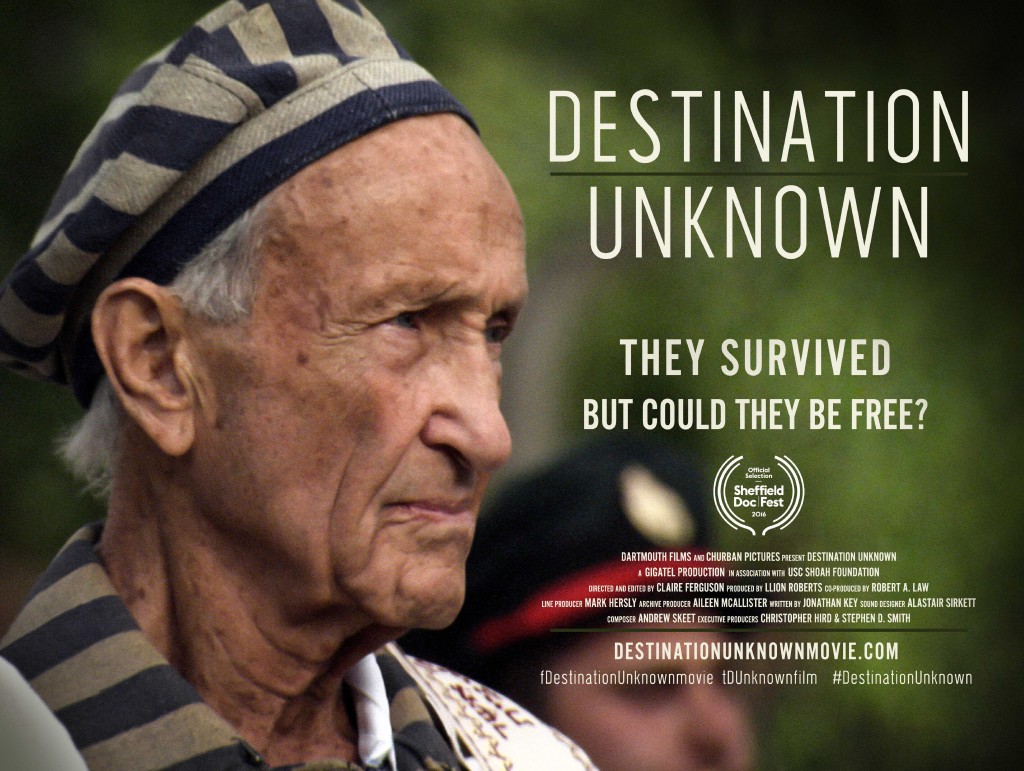