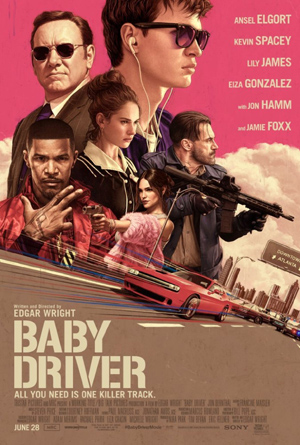 For June only, director Edgar Wright (Shaun of the Dead, Hot Fuzz, Scott Pilgrim vs the World) presents CAR CAR LAND – curating some of the classics that influenced his latest release Baby Driver, which premiered to great acclaim at SXSW and will receive a preview screening during the weekender. We welcome Edgar Wright, alongside some of his cast and crew, to this preview screening. Also attending during the weekend will be director John Landis, who will introduce a screening of his cult classic The Blues Brothers (1980).

“These movies are a literal crash course in the best car action from the 60s, 70s and 80s”
Edgar Wright

I can’t make any claims to being a great driver and I’m not even sure you could call me a gearhead (I would struggle to change a flat). However, I am a fan of action cinema in its purest form and the best film car chases are some of the most glorious collisions of sound and image in the art form. Not having had the pleasure of being in any high-speed chases growing up in rural England, I had to get my Route 66 kicks from the movies. This season represents a taster of vehicular heaven that ultimately led me to fulfil the dream of making my own car movie, Baby Driver (see our preview). Enjoy the glorious carnage about to zoom down the South Bank; I apologise in advance for the smell of burnt rubber.

CAR CAR LAND includes many classic films with the best car chases in the history of cinema: