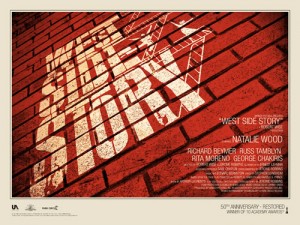 West Side Story is re-released in selected cinemas in England and Scotland from tomorrow, ahead of its 50th anniversary next month. Following last week’s re-release of Kes, it’s another welcome digital restoration by Park Circus – the repertory theatrical sales representative for MGM’s film library, which includes films originally distributed by United Artists. Beyond its ten Oscars, the film provides some serious social critique by means of an entertaining reworking of Shakespeare’s Romeo and Juliet, that will delight cinema-goers once more with its energetic choreography and dazzling colour.

Covering juvenile delinquency and an urban-centric youth violence might be undercut by the fact that its performers are all in their twenties, but there are contradictions both accidental and deliberate in the film. Its opening imagery consists of aerial footage of Manhattan, the topographical realism countered by the exaggerated primary colours that distinguish the leading stars in the action sequences that follow. Likewise, this same introductory set-piece is undercut by the camp theatricality with which its subject matter is delivered. But more than anything, the aesthetic tension between drama and musical numbers inherent in the genre finds its most explicit and fitting expression in the polyrhythms of Leonard Bernstein‘s score and the social complexities contained in Stephen Sondheim‘s lyrics. This last point is perhaps most evident in “Gee, Office Krupke”, in which gang members satirize not only the eponymous policeman who walks their beat, but the social institutions by which they are eternally misunderstood and to which they are time and again referred: as Riff pleads with imaginary authority figures, his arguments are inverted so that each figure can defer their responsibility to him. Unfolding catchily enough – the song doubles as a means by which the young characters pass time on the streets – the lyrical content of the song is powerful indeed as Riff is ‘sent’ by the police officer to a judge to a psychiatrist to a social worker to, finally, jail.

Beginning by challenging the polemics by which the underprivileged are referred (“There is good, there is good / There is untapped good / Like inside us the worst of us is good”), by the end of the song the social institutions, themselves an expression of systemic pressures, have destroyed any sense of self-worth in the young people, to the point at which they echo word for word the condemnations given them from above (“We’re no good, we’re no good / We’re no earthly good / Like the best of us is no damned good”). The rebelliousness of the song’s final lines (“Gee, Officer Krupke / Krup you”) is a telling indictment of a system that continues to fail its youth; following the privileged cries of “sheer criminality” in response to the looting in the UK a few months back, the film – set in America, the pinnacle of advanced capitalism – takes on new levels of profundity. To similar effect earlier in the film, during the song “America”, the Puerto Ricans sing about the contradictions of American life. As the women, finding new relative social freedoms in their new country, praise its way of life, their men offer curt responses that temper such naivety. The result is a song that is genius in its brevity and powerful in the complexity of its style and content. Consider this quartet, and how its final line offers a succinct complication to the simplicity of the three lines preceding it: “I like to be in America / Okay by me in America / Everything free in America / For a small fee in America”. Likewise, the following couplets are wonderfully provocative not only of racial tension, but the fundamental economic contradictions from which such oppression stems: “Buying on credit is so nice / One look at us and they charge twice”; “I have my own washing machine / What will you have not to keep clean?”; “Industry boom in America / Twelve in a room in America”; “Life can be bright in America / If you can fight in America / Life is all right in America / If you’re a White in America”.

The flair and energy of this impressive number is echoed with much darker undertones later in the film, when Anita (Rita Moreno), the lead female performer of the earlier routine, is humiliated and harassed by the male members of the Jets, who reject her claims to help them. The sequence – which might have been more explicit but for production code restraints – is accompanied musically by precisely the same instrumentation as “America”. The irony is vivid.

Directed with an accomplished simplicity by Robert Wise and choreographed for the screen by Jerome Robbins – who’d directed the Broadway version – West Side Story‘s digital restoration, complete with intermission, should find a new and eager audience in an age of High School Musical and Glee. But for all its whimsy and escapist fluff – the central romance hasn’t dated well, if it was ever taken seriously to begin with – the 1961 film offers a significant critique parallel to its many aesthetic delights, that makes its restoration and theatrical release all the more significant.