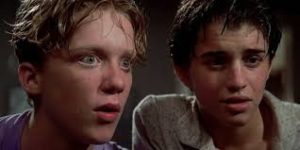 The teenage male has a hard life. Yes it pales in regard to the bridge between girl and woman but this John Hughes film explores, if with a skewed eye, the male of the species. School is tough for the newly post pubescent boy and they have problems with place, predominance and dominance. Then comes the worst situation. That of the opposite sex. A major stumbling block to happiness and success in life. Some navigate it just and others fail miserably. What about those that create their own prefect model?

Gary (Anthony Micheael Hall) and Wyatt (IIan Mitchell-Smith) are geeks, so unable to experience hope at school that they plan to make their own woman. Beautiful, brainy and able to wear a bikini without a crease. This sounds like a pipe dream, until that is a computer malfunction creates a real virtual woman. She comes with amazing attributes and strange additional qualities. 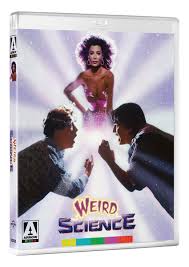 WARNING. I Do not fucking care about your anger at sexual politics. I do not care you are offended by WEIRD SCIENCE and are either white / left wing / POC. I am not here to tell you you are wrong, more stop. Stop now the modern, revisionist nonsense with films like this. Those that see WEIRD SCIENCE as a puerile, teen, wet dream need to step off. You have been programmed well.  John Hughes (a now vilified figure in modern film circles) might have written and directed it but stop! It is not a great film. This much is obvious from its first ten minutes. But it is the sort of film that brought flashes of 70s sexual politics to 80s teen culture. Hughes seems to have been writing this and SIXTEEN CANDLES (also released and reviewed shortly) as films speaking young people about the sexual battleground they find themselves in. Its funny, it often gets the passage of male hood right. Its not subtle but neither are horny kids.