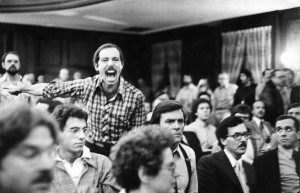 As its title suggests, Vito (2011) is concerned primarily with the biographical details of its subject as related by those who knew him on a first-name basis – friends, family, colleagues, biographer, fellow activists. Originally made for HBO and released for the first time on DVD by Peccadillo Pictures, the film is an effective and sometimes affecting overview of Vito Russo, a key figure in the early gay-rights movement and, later, in the struggle against AIDS.

Directed by Jeffrey Schwarz, whose latest documentary I Am Divine opened the London Lesbian and Gay Film Festival last week, Vito traces its subject’s career from his early upbringing in 1960s New Jersey to his days as a New York-based activist during the 1970s, and includes his successful efforts as a cinephile-turned-scholar to undertake the mammoth task of researching and bringing to light the history of homosexuality on film, as well as the significant part he played in the fight against AIDS – and the political challenges and social prejudices it carried – before his death in 1990.

Clear from the outset here is Russo’s forthright attitude towards his own homosexuality.  Contrary to prevailing ideas in the United States at the time (he was brought up in a Catholic household), Russo was convinced that there could never be anything immoral or evil about one’s sexual preferences, and was bemused by what he perceived as a passive acceptance of sexual oppression by other homosexuals. In an interview he gave in the 1980s, extracts of which are included here, he recalls how as an 18-year-old homosexual living in Greenwich Village, he lost his job for kissing a male, and how he came out during a hostile social current that viewed homosexuality as some kind of illness.

Schwarz’s documentary, seamlessly edited by Philip Harrison, assembles interviews with Russo’s brother Charles, his cousin Phyllis Antonellis, his biographer Michael Schiavi, fellow activisits Lou Matella and Arnie Kantrowitz and, among others, celebrities and influential media figures such as Bruce Vilanch, Gabriel Rotello and Lily Tomlin, all of whom shed insights on Russo’s life chronologically and with clarity. Schwarz and co. do well to give an idea, with understandably limited scope and resources, of the contradictions of post-war New York life – how on the one hand it seemed the natural place to be for someone whose sexuality was at best regarded with deep suspicion by large sections of officialdom, while on the other hand it drove such people, in essence, underground. Russo was present during that pivotal episode in catalysing the gay liberation movement, when police officers raided Greenwich Village’s Stonewall Inn, in June 1969, when members of the homosexual community spontaneously rebelled against the violence and humiliation suffered at the hands of New York’s Finest.

Russo’s contribution to establishing a political base for gays included journalist work for influential LGBT monthly The Advocate, for whom he interviewed popular actress Lily Tomlin (who came out under Russo’s byline), and a reliably outspoken, inclusive approach to public speaking. Russo was encouraged to channel his cinephilia into an official and what would turn out to be long-lasting research project, for which he sought and unearthed – at a time when films existed on print only – a multitude of filmic references, explicit and implicit, to homosexuality. According to Schiavi, the research took him to film archives and libraries all over America as well as in Europe; he watched three films a day and over an approximately five-year period watched over 400 movies.

Crucially, Russo found that in those films especially made under Hollywood’s Production Code (1933-61), since any reference to sexually subversive activity was forbidden, the whole idea and identity of homosexuality was denied. Any such censorship, as is noted here, pushes material desires and needs into the subtextual realm, and so Russo found in these films many subliminal readings. His findings and arguments were published in 1981 (and revised in 1987) as The Celluloid Closet: Homosexuality in the Movies, a groundbreaking historical study and a major work in establishing Queer Theory’s place in film studies. (Rob Epstein and Jeffrey Friedman made a documentary of the same name and subject in 1995.) The wealth of films referenced in Schwarz’s film includes Different From the Others (1919), Stick Around (1925), A Florida Enchantment (1914), Algie, the Miner (1924), Pandora’s Box (1929), Wings (1927) and Call Her Savage (1932).

One of the overriding concerns for Russo’s academic study was that just as homosexuals gathered a political base and became socially liberated, so too were filmic representations more explicit, and the backlash within the morally conservative mainstream was damningly negative portrayals of the gay community. Such portrayals in popular media no doubt conditioned the hysteria surrounding the AIDS pandemic in the ’80s, and as Vito moves into its unavoidably tragic final segments, Russo’s own real-life arc comes to acquire the multiple threads of third-act dramatic urgency: dealing with his lover Jeffrey Sevcik’s illness and AIDS-related death; continuing his activism in the war against the political abandonment and social stigma left in the wake of AIDS; and, finally and concurrently, his struggle with his own AIDS diagnosis – an outcome foreshadowed by the film’s very opening montage, in which Russo’s face during introductions to Our Time, the television show he hosted, becomes increasingly gaunt.

Schwarz’s documentary is concise and clear. It deserves a wider audience precisely because its central figure’s stirring activism – as he himself notes in an interview late on – is deeply rooted in a hatred not just for homophobia, but for social injustice in general. Informed by an undimming anger for political repression and driven by a desire for tolerance and inclusion, Russo rewards such a biographical account as this and speaks to our own ongoing struggles against the state apparatus.

‘Vito’ is available on DVD from Monday, 25 March, and also screens at Greenwich Picturehouse, London on the same date.