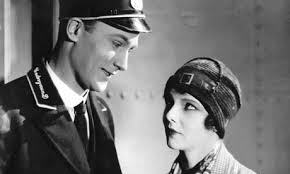 It’s always interesting to see a British silent film as they seem to be a bit if  of a rarity when it comes to availability. So I was looking forward to  seeing Anthony Asquith’s (most famous for The Importance Of Being  Earnest (1952))Underground (1928) ever since I’d seen that it had been  restored by the BFI.

The film concerns a love triangle (a typical Asquith trope) and the fate of  two couples one who are in love and idyllic lovers, Bert (Brian Aherne)  and Nell (Elissa Landi), and another where the woman loves a violent  manipulative man who wants to be with Nell at whatever cost, Bill (Cyril McLagen) and Kate (Norah Baring). Bill devises a way using Kate to lower Bert’s reputation and get him fired from his job as an underground worker so he can be with Nell with tragic consequences, and Nell and Bert have to try and find them to get them to tell the truth. Asquith uses the modern, for that time, setting of the underground as a place where these different couples can meet, where as the title says ‘all sorts of conditions of men’ and ‘workaday’ people can coexist.

The camera techniques that Asquith employs to film this simple story, remarkable that he filmed this at 26, are quite sophisticated and modern. He employs rapid zooms, travelling POV shots from the trains, POV shots where the 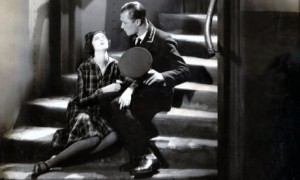 audience is the victim of a character’s punch, canted angles; and plays up shadows which borrow from German Expressionism, similar to Hitchcock, and typically stand for the entrapment of the character, such as shadows that look like prison bars (in one scene he even has the shadows of Bert and Nell kiss and embrace standing for their desires). Similar to Hitchcock’s Blackmail he also includes a rooftop chase which makes good use of the location of The  Lots Road Power Station. It’s also interesting to just to see the underground as it was back then all art deco lights, tiling and wooden escalators.

There are also funny moments that enliven it, such as the opening scene in the tube when we see an older man ogling young ladies, another disconcerted man tutting a man looking at his paper, an anxious young man trying to give up his seat for a sour old Salvation Army lady and a fat man taking up too much room. Or when Nell and Bert first meet and they get stuck on the same position on the elevator as they’re going up the wrong way, so dazzled are they by each other. These moments show how little human behavior has changed and bring out humour in the everyday. 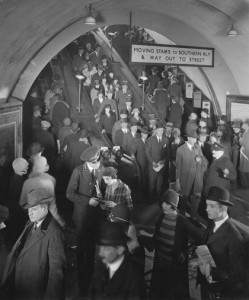 But in characterisation and plotting it is rather dated and simplistic and wears thin on the modern viewer.  Bert and Nell are too idealistic and perfect and too in love for having met a day ago, and a scene in which they give food to an orphan boy reeks of sentimentality. While Bill is one dimensionally bad and speaks on the inter-titles in a broad cockney accent where Bert and Nell don’t, which seems rather classist and prejudiced for what is meant to be a story about everyday people. While Kate is rather a pathetic soppy character who clearly need s to get her head checked if he thinks Bill’s the one for her.  There are also moments where the lack of continuity is unintentionally hilarious such as when Bert emerges from a lake and looks as if his suit has been instantaneously dry-cleaned.  But I was rather moved by Italian actress Elissa Landi’s portrayal being the most naturalistic and modern, her camera perfect face implying so much in simple expressions and gestures, similar to Lillian Gish’s acting style.

And it’s an interesting and historically important look at British filmmaking in its beginnings and is nicely restored by the BFI with an energetic, dramatic and sweeping new orchestral score by Neil Brand featuring the brilliant  BBC Symphony Orchestra, which perfectly captures the mood of the film and gives scenes like the final chase extra impact. There’s also a bunch of extras including period documentaries and extensive liner notes. Just don’t look for character development or a complex story.