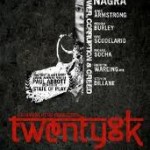 Someone once asked me what it means to be British. I gave a bland and predicable response, waffling on about roast dinners, The Royal Family and our inexplicable obsession with sarcastic humour. After watching Twenty8K I know exactly what it means to be British thanks to its genius directors, David Kew and Neil Thompson. Gritty, painfully honest and unashamedly relevant, Twenty8K makes a poignant statement about modern British culture in such a daring way… it couldn’t be ignored.

We find ourselves in a nightclub in Southwood Park, East London, lost in a blur of booze, beats, drugs, tattoos and thugs. Dubstep and old school garage tunes throb on like yesterday’s hangover as youngster Vip Jani (Sebastian Nanena) leaves the club after smashing a DJ set. Gun shots sound from outside, slicing through the music causing deafening silence. Vip flees from the scene of the crime carrying a gun, seen and captured both by eye witnesses and CCTV footage. The victim dies days later, making Vip the key suspect in a murder investigation.

It becomes apparent that things aren’t as straightforward as they appear. Smart, persistent and fiercely determined, Vip’s devoted sister Deeva Jani (Parminder Nagra) turns detective, fighting tooth and nail to uncover the truth before her brother’s fate is sealed. Successful and affluent Nagra adopts a role reminiscent of that which saw her rise to fame in Bend It Like Beckham– a modern Asian woman battling to succeed in a man’s world caught in an identity crisis- where her culture seems to be her only hindrance. Here however, it’s not an identity crisis, it’s a femininity conundrum. Her accomplishments- (made blatant as she saunters and swerves around London looking stylish in a slick Audi) and her Paris based high-flyer job mean nothing to the hood rats that jeer after her, like a group of stereotypical lecherous builders working overtime. Yet her beauty and charm also enable her to trick and swindle those with one-track minds, asserting herself as the ultimate female boss of the piece. It’s high time we had a female bond.

Fast paced and action packed straight from the off, Twenty8K injects almost lethal doses of adrenaline. At one pulse quickening point, our heroine is trapped in a drug den surrounded by murderous men like a rat in a maze. If you’re easily offended, this film is not for you. There’s rape, murder, garish violence and at times it’s just plain sick. Yet it oozes excellence. From the sharp editing (minus a few dodgy -but forgivable- fade outs) to its music score, there’s not one element that is short of sublime. The acting is bitterly raw and consistently moving. Kaya Scodelario (better known as Effy from Skins) particularly resonates, excelling herself, giving a mature and harrowingly beautiful performance that’s almost disturbing in nature.

So apparently, Kidulthood met The Girl with the Dragon Tattoo and gave us it’s deliciously twisted love child, Twenty8K. Smart, intricate and downright ballsy, it’s time us Brits had a Tarantino or two! This quite simply is a tribute to modern British cinema… David Kew and Neil Thompson- we salute you.