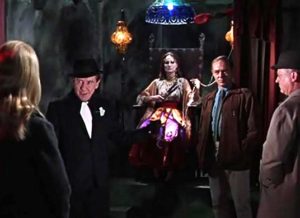 The Torture Garden exhibit. Many go in and look around. They are guided by its owner and the man who runs it,  showman Dr. Diabolo. Five are more compelled then the others and decide to stay on. The good doctor has something else to show them. They pay for the new exhibition, which he promises will be one to remember. Its hidden in the dark recesses of the sideshow. Its has seated in the middle of it a strange woman. She is called Atropos, the woman of legend. She can see much and is known to be able to foretell the future. She sits with strings in her hand and one by one, reveals to those present their futures…. 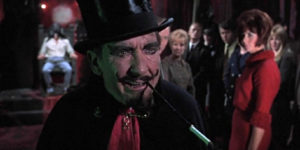 Amicus Productions was a British based studio, set up by 2 clever American film producers. It made some staggering films and it made some dross in my opinion. This portmanteau film sits in the former selection. Blending the fears that plagued a current generation, that of inheritance, identity, wealth dispersal and sexual identity. 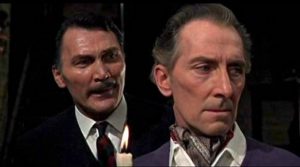 Defining the promise of a generation with the staggering understanding idea that destiny, with a capital D is ever flowing and can be controlled. This was new to the audience as before horror was enacted without a human element in control. That said Torture Garden is cleverer than most. Its playful, sardonic and quite often deeply rich in storytelling skill. Its also well worth a visit if you have never known or seen any of this studios productions. 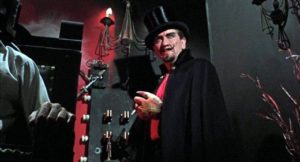 The release by the fabulous indicator / powerhouse is filled with very good pieces of a puzzle. The remaster is clean enough and brings out those sharp palettes of colour.  The Robert Bloch piece is excellent. The essay by Mayne is outstanding…