In Alex Cox audio commentary, you get more than you bargained for. A through, thought inducing analysis of this film but also how this film connects to a plethora of great western genre cinema. 1969 THE SPECIALISTS might just be one of the best under seen of these. Directed by Sergio Corbucci (the original DJANGO and the jet black THE GREAT SILENCE) and starring Gastone Moschin and French rock star and international heart throb, Johnny Hallyday.

Hud (Johnny Hallyday) arrives in Blackstone. This dirt strewn, mud soaked town might seem innocent but it has something buried deep. Hud brother had been falsely accused of robbing a bank. He was hung out to dry and then hung. No court would have convicted and so Hud is determined to avenge. When his investigation opens up a conspiracy and  powerful people trying to hide it.

THE SPECALISTS pivots on the classic revenge narrative but has the dynamic action that Corbucci films excel at. This is often drenched in sweat, gun blasting and explosive. Now its not as good as Enzo G. Castellari physical and slow-motion sequences but you get the cut and thrust of a narrative that plays it real. Gritty and grizzly.

Right. Yes and No. The tonal richness of the print have translated but I really wanted the 4K clarity to have been available. What you get in that shine, shimmer and colour is lost occasionally in the depth of an image and the browns lose shape. 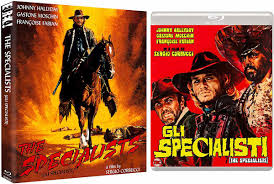 The interview with Austin Fisher extrapolates a lot of this and build on Cox’s discuss of Corbucci’s work. A body of work, hell bent on removing the veneer of civility that the Western legends were built on. Both commentators grasp this and never let go. Also really cool is that dub track. God I forgot how you saw this in the past.