The Man Who Killed Hitler And Then The Bigfoot DVD REVIEW 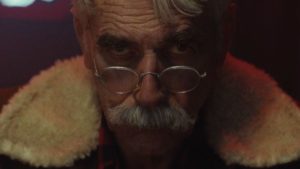 A legend and a legacy merge in this sci fi, fantasy dream about the war that changed everything and the peace that left a hangover. The Man Who Killed Hitler And Then The Bigfoot, might sound like a mouthful of a title but it is a film that tries to fuse some serious film making. Taking commentary on the Second war and its legacy, with a healthly dose of myth busting and building. Sam Elliott heads a solid cast as the older central hero Calvin Barr.  He lives in the same place he has since his return. His brother Ed still cuts his hair and still gives him grief over his choice of style. He is also living with the legacy of his past involvement in the war, death of Hitler and then as escapade with something else. Maybe the Bigfoot. Maybe. Aidan Turner is younger Calvin. Walking through the Nazi occupied Poland and Germany. Working with the Partisans. Shooting Hitler. All that and more. Problem is how much is truth, how much is legend. How much is lie? 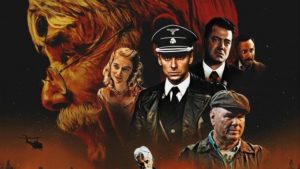 Though it fails in a lot of what it is attempting, from it confusing legend and legacy without clearing this up, slowing down in its mid section to a crawl and having more style then substance, The Man Who Killed Hitler And Then The Bigfoot is still worth a watch. Robert D. Krzykowski should be commended for his film. It has a robust script and stylish direction. This makes the viewing experience much more of a deliciously sardonic joy. When it begins to get bogged down in ideas, this actually helps you move attention away from the plot to the terxtures of visual elements. Krzykowski direction is not the only highpoint as the cast are also very good indeed. What has happened is that this has failed to translate across the divide of fantasy and legend. Aidan Turner and Caitlin FitzGerald have great chemistry. However in the end the viewer is not compelled enough to ask if what they are watching is to be questioned. They just do not care enough in the end to commit. Though they, like me enjoyed the ride.