The Man From The Future DVD review 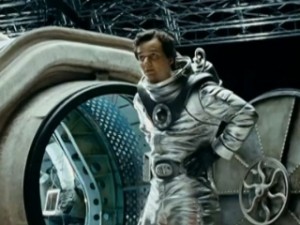 Zero is a not very well respected scientist, who lost everything when his heart was crushed by the girl of his dreams in college. He wasn’t always called ZERO mind, he was know as Jorge but after what happened everyone calls him this. You see the woman of his dreams, well she humiliated him at the school prom in front of everyone he knew and liked. Now he has just  created a machine that opens a portal to the past. This will mean he can go back and correct all of those mistakes and become respected and get the girl of his dreams. The machine takes him back to 1991 and his opportunity to rewrite the past is close at hand.  The only problem is that now he has to convince his former self of the plan….

Time travel is not a new topic that cinema is venturing into. Nor is the idea of a machine that allows you to go back and see that past in all its glory. You can guess from here that this film owes quite a debt to Back to the Future. The BTTF DNA so to speak, is inside the very core of this film and it actually benefits from this association. The idea of going back to correct previous wrongs or missteps on the path to adulthood however is not only based in time travel films. It is the underlying point of almost every rom com or romantic epic. We all have a moment (or quite a few) that have stayed with us. Moments we wish we could change because they have left us with a sense of compromise. A sense of losing out to others in the race for life and hope. This is such a universal trait, it would seem that the audience has been pulled in by the film and its simple narrative and they have loved it.So this film merges both conventions and types to fit in to a BTTF / Pretty Woman hybrid that at once works and is also hollow but fun. It plays the form and pivots it on an expectation story of desire and despair. The winning of the girl is a reflection of the hero wanting to achieve his goal. Yes it is a man and he is capturing a woman but read it as a film about a man capturing his life back and fulfilling his destiny.

Both funny and heart felt, you have to be very honest with the film and your expectations of it. This is not BTTF and that film had a very dark subtext that this film runs a mile from. Instead here is a film that only wants to say, he lost her and his dignity and so became a loser. Now he has to win her back and becomes a hero. To many this will seem familiar but the film plays a round with this a little, not a lot. Enough to make it worth a watch and a little investment. I liked its BTTF2 scene with the cause/ effect process that is superb. This balances our expectation with anticipation. I wont say more than that. I also loved the playful pieces that are sprinkled into the mix by the filmmakers. The hues, framing and shot selection is all very solid. The SFX are convincing and also allow the investment to work. The subtitles can be ignored in places as the visual storytelling is also very good.

Now to the DVD itself and I have to scream at simply media. Please guys put something into these discs. The film needs more to it and it is hard for me to justify the spend. So you should buy it for the film and do not expect anything else on the disc…there is not anything….