Welcome to Russia and its central region. This is a place that is empty and cold. A barren wasteland which is sweep with a remorseless wind. A moss filled tundra, populated by death and hordes of killing agents. No salvation here, just a longing for violence and a taste for blood in the mouth and on the sword. This wasteland is filled with wandering souls, sent to the four winds after the collapse of the Scythians. They have now become a band of jobbing mercenaries. Fighting for whoever pays the largest prize or the biggest payment. When Lutobor becomes embroiled in a tribal war however, loyalties and a captured Scthian, led to violence and death. Will they know about compromise? Will they know about the hope of making life better for all and not just for the one that pays the masters fees?

Set in Russia during the early 12th century, THE LAST WARRIOR is a sword slicing, blood spilling medieval action piece, playing to the choreographed fight scene audience that want simplified narratives and staccato language. Making it clear who says what and what motivates them. Directly. 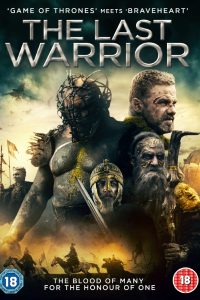 Some of the previous press on this film has shaped it as either A: a knock off Game of Thrones. B A Russian version of Braveheart or C a mixture of the two ideas that relate to both films and are equal for both. Well with me its a little more like this. Mad Max meets itself but then steals details from the vast post apocalyptic universe created around all of this. Is it any good? Well if you want to switch off the mind and be invigorated by blood and sword play, then yes! If you want to watch a film that meditates on violence or discusses history as more than a propaganda tool, then no!