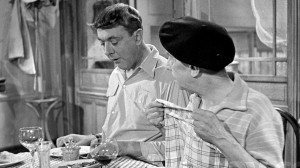 Studio Canal have put together a great boxset that truly earns its title as the ‘essential’ collection. Not only does the set contain practically every Tati feature and short film but it is also packed with extra material provided by Tati expert Stéphane Goudet. Most of the films have received a stunning transfer, particularly his more well-known features – Mr Hulot’s Holiday, Mon Oncle, and Playtime. They are such visceral works of art that they feel truly at home in high definition.

Tati’s comedies are more explorations of people and locations than they are traditional narrative films. Many critics highly praise his presentation of the effects of modernisation although the films’ subtle simplicity is enough to make them universally appealing regardless of their social significance. Tati has an interesting comedic presence. He is not necessarily ‘funny’ by today’s standards but his naïve, harmless manner as he plods from place to place is quite endearing and amusing to watch. Despite being the star of all of his films he retains a certain degree of humbleness, often allowing the camera to leave him behind as he explores other people and locations.

Not only does the set provide the complete adventures of Mr Hulot but it also has a few treats for already established fans looking to expand their Tati knowledge. The three outliers are Jour de fête, Parade, and Les courts metrages (a selection of short films) as Tati does not play Hulot in these. The original black and white version of Jour de fête, his first feature, has received a glorious transfer. The colour version is also available on the blu-ray as the ‘1994 version’ but runs about ten minutes shorter and isn’t in high definition. Jour de fête doesn’t reach the heights of his later work but it’s still nice to see how he established his themes and his use of movement in his slapstick routines.

Mr Hulot’s Holiday has benefited the most from the upgrade to high definition as the warmth of the beach setting radiates on-screen. The music in this film is possibly the best of the series and the holiday environment creates a nostalgic feeling for those who remember visiting the beach as a child. This is also available in two versions – the 1953 version is longer but sadly is of much lower quality.

Mon Oncle is a little heavier on the social commentary but maintains Tati’s finest elements. Now a fully established character, Hulot’s inquisitive nature starts to run wild in this instalment. Visually, it is almost as stunning as Playtime but doesn’t have its expansive settings or the nostalgia of Holiday. Some of the gags also feel a bit dragged out and repetitive making it a bit less engaging than the other two. Tati does, however, really start to delve into his study of modernisation – obsessing over gadgets, the construction of public image, and consumerism as a form of mass hysteria. The film is available in both an English and French language version on the blu-ray. 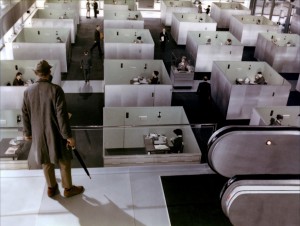 Playtime is widely considered to be at the pinnacle of Tati’s career and unfortunately it was so ambitious that he never fully recovered financially from it. From the opening scene it is clear just how much effort was put into the creation of ‘Tativille’. It really feels as if the whole film is set in its own, expansive universe. He explores modernisation again with the main focus being on the layout of buildings. The composition of Playtime is definitely the best of all his films, with so much happening in the background and foreground of each scene it’s impossible to notice everything on a first viewing; perhaps this is why this film in particular has become so popular. It still never quite recaptures the warmth of Mr Hulot’s Holiday and does feel a bit too meandering in places but the overall effect is worthy of its praise.

Trafic and Parade are the two weaker features in the set. Trafic unfortunately suffered due to Tati’s financial troubles. It feels like it drags on for the longest despite the fact it is shorter than Mon Oncle and Playtime. The content is not particularly memorable but it has still received a great transfer and Tati retains his trademark style with a particular focus on cars and traffic. Parade takes him back to his music hall roots as it is a film of a performance he did live at a circus. For some reason it appears to flit between high definition and rather dated television footage which can be a bit jarring. The content is nothing particularly outstanding but enough to satisfy avid fans of Tati’s work.

The collection of short films is possibly the greatest addition to the set as they are so difficult to find elsewhere. The three short films from the 1930s are quite dated and are mostly of lower quality than the others. The two best are L’ecole des facteurs (School for Postmen) and Cours de soir (Evening Classes). The latter is a particularly fascinating insight into Tati’s ability to imitate human behaviour as he attempts to teach his comedic technique to a class. It shows just how good of a director he was as he was able to make his actors perform in his peculiar style in all of his films.

The Essential Jacques Tati Blu-ray boxset is unmissable for those already obsessed with Tati but also a worthy addition to any film fan’s collection. As is the case with any compilation, some films are weaker than others but those that have received a decent transfer are definitely worth a watch.