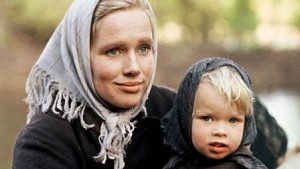 The journey from Swedish small rural life to America and the new world is documented in this epic. We start at the beginning in The Emigrants. Sweden and the farm that is bringing nothing to its farmers but pain and suffering. The land wont till, seed wont grow and conditions are awful. They cross land, sea and then land again in order to get to the promise of better. In The New Land they work the land through fall, swamp, snow and death in order to make a better life come from the seed sown and the labour spent, 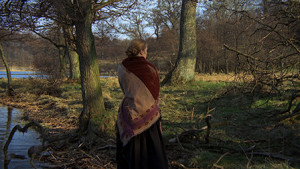 The story of travel and the longing for a better life are as current a theme as any other. The news is filled with Syrians escaping war to a better life, Christians leaving Africa in order to escape persecution and even people escaping poverty from Pakistan to a better life in the west. The strange thing is that many of us are offspring of immigrants and as such should at the very least understand the stories of others wanting better and escaping suffering that say my Grandfather suffered in Ireland. 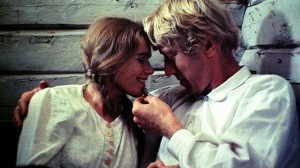 The Emigrants opens up on the first part of this story of leaving and changing everything for better. It covers an average family looking at their own soil, their own land and realising that it no longer could sustain a life. By using close up and steady camera we get intimacy, immediacy and compassion. By using the real, we have compelling relationships built, labour is connected to land and to person. We feel pain and understand the toils as if our own. They are in many respects as they are in our genetic code. 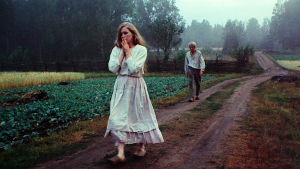 The New Land takes that journey and then starts at the previous end. We see how the toils continue. How suffering from one place to another is translated but that in the end the journey becomes the message of us all. The built environment of characters pays off in The New Land. We care and have invested so much that every turn, move and breath is our own and ours. We are riveted by the passions, pains, loss and lives of those who did the amazing. They travelled thousands of miles for the betterment of themselves and their kin.

The series of films is epic in scope but intimate in execution. The power of the piece is in its simple but yet tender telling of lives and loves. Director Troell uses emotion and environment in cohesion. Experiences are not dulled by this but are often even more potent. We are living a life and in lives that are not familiar but are real enough to us the viewer. The way of the piece is to make events happen as in real life and in reality. No special build up or sign posts, simply the pain of immediate knowledge of loss, the joy of knowing that you have succeeded for a moment and the smile that comes. The performances from Sydow is excellent. He goes to lengths that are almost not imagined to tell us his hardships and pain. Ullman also is fantastic as the struggling mother and head of the house of many children. She has the day by the labour of her strength yet the truth in her performances.

The discs are amazing as the film. Greta looking transfer, good introductions and that Doc is outstanding….All in All BUY IT! 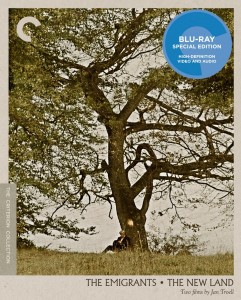 • To Paint with Pictures, a 2005 documentary on the making of the films, featuring archival footage as well as interviews with Troell, Ullmann, producer and co- screenwriter Bengt Forslund, and actor Eddie Axberg

PLUS: An essay by critic Terrence Rafferty