The Discreet Charm of the Bourgeoisie DVD Review 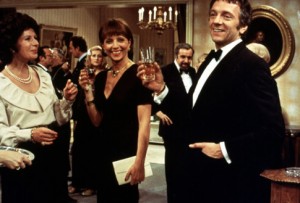 Luis Buñuel is known for his experimental and surrealist films; some of the most prominent being Un Chien Andalou, Belle De Jour and The Exterminating Angel. The Discreet Charm of the Bourgeoisie acts as a representation of Buñuel’s political and social views. The film follows six characters as they persistently attempt and fail to have dinner together and the absurd situations they get themselves into.

Buñuel’s view of the bourgeoisie is negative in the way he focuses on their falseness, paranoia and corruption. One of the men says at one point “I fancy hare pâté, but in restaurants, it’s always too salty” to which his friend adds “I’d have caviar but it might be of poor quality”. The characters are rude, fussy and represent Buñuel’s leftist views as well as the idea that the middle class exploits the working class. There are many links with another of Buñuel’s films, The Exterminating Angel, in the focus on those who are wealthy in society.

The great thing about Buñuel’s work is that almost all of his films can be seen as still relevant to modern society. The characters he uses in this film reduce important topics of conversation to cocktail party small-talk as their insecurities become apparent through their dreams. Buñuel’s interest in Freud’s work on dreams is clear in all of his films. He tended to take a theme or idea and explore it. In the case of The Discreet Charm of the Bourgeoisie, the visuals aren’t as engaging as in films such as Un Chien Andalou but there is a more general theme and message running throughout which is similar to Belle De Jour. I personally prefer Belle De Jour because I find the subject matter more interesting and it has more striking images. However, this film is equally as well put together and there is a great dream sequence where a dining room the characters are in turns into a stage, exposing the theatrical and fake nature of their social interaction.

The film is amusing as times because it is such a farce. One moment I found most amusing was when the characters are arrested at one of their dinner parties. There are also some very grim undertones throughout; with references to violent dreams, guns and at one point there is even a dead man in the room next to where the characters are going to eat.

There is a great special feature on the DVD release of a critical analysis of the film. In this extra some of Buñuel’s other work is also discussed.