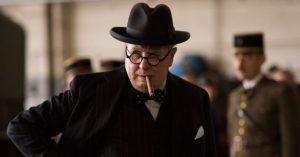 Historical issues, Brexit fantasy, false narratives on Churchill and over bloated story telling. This discourse has plagued THE DARKEST HOUR, Joe Wrights bio pic of the man who lead the world in the fight against Nazi tyranny. He was also the man who starved a million people, bankrupted a nation and had the ego of a titan. This kind of dualism is common with great figures. The public persona of a person, with the uncomfortable facts that hide in plain sight sometimes. 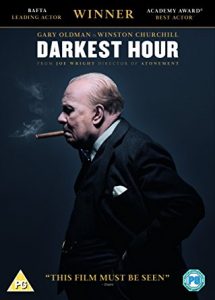 Joe Wright’s film charts Churchill’s election after Chamberlain is forced to resign by the Labour party, due in part to his perception about Hitler and Nazi Germany being deeply flawed. With his reputation in tatters, Chamberlain pushes for Lord Halifax to become Prime minister. However Labour will not stomach that. So it has to be Churchill. His reputation is far more difficult to reconcile for many. His opinions on India, his soldering in the Great war and his support of the former King hang like weights. However he is nothing but a force of nature, a man who stands for something and sees it through. Given the Prime Minister ship, He takes hold of the position and pushes forward. However he has many enemies. Some want to trip him up, others are not sure how to play him subsequently. Winston is nothing but an unexpected creature. 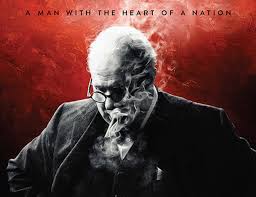 Hardest of all things in the film world, is to have an opinion contrary to the standard. So to avoid having to battle empty rhetoric, I will speak simply about the core of this film. Forget what Joe Wright simply says ‘because he can do’ those very clever but often over blown visuals buffer sequences. Forget the often inconsistent script, that plays more ‘melo’ than drama. Instead focus on Gary Oldman. He captivates and compels the viewer to watch. He also fits the range of an egotistical and arrogant man. Pitching emotional bellicose with bluster in increasingly skilled shots. This is is most effective and restrained performance. One that reflects a skill for acting, like none before.