Eleven tales set during Halloween that take on the same neighbourhood with multiple story lines that revolve around trick or treating, candy consumption, forbidden love, the devil living in a house, monsters from unexpected places and even strange oddball rituals. These are all accompanied by cameos from famous directors, in jokes, satire, send up and a little bit of blood red guts and gore.  All of these are blended together to make a modern revision of tales that some of us heard as children and some of us heard as wide eyed adults looking for another fix of horror delights. 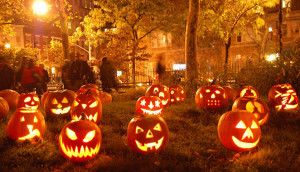 Tame, Lame and lacking in the any type of profanity. This series of horror film shorts or portmanteau film reminded me of a series on kids television when I was a teenager called salt dough ornaments Goosebumps. It wasn’t scary in the least but had a tongue in cheek charm that played with the form but didn’t want to be to far away from its core child audience. This series is exactly like that but with a slightly upscale visual version. I found the stories anodyne and harmless, the execution was soft and lacking in grit and the overall mood was 50’s throw back ham. This is not to say that the films are not very good, as they are. It is instead my way of saying that the films have no ability to leave anything with you. No scare, no laughs…nothing.

The saving grace to the discs on the blu ray is the host of extras. The extra films are all fun and continue the 50’s fun with Marshall on the top with his film. The commentary on the discs all seem to add texture but it is the pop up video Play Dough Recipe stuff that worked most for me. I got the in jokes and got the homages but here they are explored and expanded. This is an underused technique in my eyes that can allow for a film fan to watch and learn, under stand and over analyse. Great stuff that.