Reaching for the Moon DVD Review

Bruno Barreto’s latest film, Reaching for the Moon, follows the tragic and tempestuous relationship between American poet laureate, Elizabeth Bishop (Miranda Otto) and Brazilian architect, Lota de Macedo Soares (Gloria Pires). Spanning over 15 years of their relationship, Barretto’s biopic explores the ins and outs of there forbidden romance, from its conception to its tragic ending. Beginning in New York City, we follow Elizabeth to Brazil for a short two-week respite period, in which she can get her head together and finish a poem she has been working from. Staying with a friend from college, she meets Lota for the first time. Whilst initially the two don’t get on, following a hospital visit for Elizabeth, she is required to stay in Brazil for longer, and their romance starts to blossom.

If like me, going in you know very little/next to nothing about Bishop’s and Soares’s cultural legacies, you’d be forgiven for thinking Reaching for the Moon is nothing more than a sentimental story of a famous romance. The film’s poster and tagline (“Two Iconic Women, One Unyielding Passion), don’t do much to help this misconception, and even the films score feels far too sentimental for the film’s, at times, tragic vibe. In reality the couples romance, as presented here, seems to be one full of complications, pain and depression. Elizabeth, an alcoholic and Lota, a woman who wants everything. So much so that when her relationship with Elizabeth begins, Lota is already dating Elizabeth’s friend from college, Mary. Rather then letting Mary leave, Lota buys a child for the two of them to raise, and continues her relationship with Elizabeth. This is only the first hurdle Lota and Elizabeth must jump together though. They relationship is plagued by the homophobia of the era, Elizabeth’s alcoholism, Lota’s mental health, and both of their demanding careers.

The performances in the film on a whole are good, but in particular Miranda Otto delivers a powerful and memorable performance, and outshines Pires (who is also very good) at every turn. The real star of the film however, is Brazil, Bruno Barretto (best known for Dona Flor and her two Husbands and Four Days in September) films his home country with a remarkable flair for beauty. Capturing both rural Brazil and early Rio magnificently, creating Brazil as a character in itself, just as cities like New York so often are. Elizabeth’s romance is as much with Brazil, as it is with Gloria.

Reaching for the Moon is an incredibly watchable, and aesthetically pleasing film, but suffers in its pacing. Constantly speeding up and 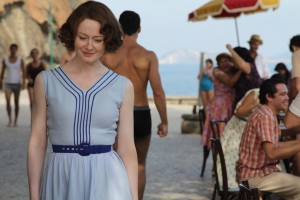 slowing down the plot becomes a little unjarring to watch at times, and large chunks of the middle seemed unnecessary. I suppose condensing a 15 year relationship in to two and a half hours is never going to go particularly smoothly, regardless I’ve seen better biopics handle longer periods of time better. Like a lot of biopics, Reaching for the Moon seems to suggest that if you are a gifted artist searching for happiness, you are unlikely to ever find it, but Elizabeth Bishop found a happiness that wasn’t available to her at home, where she least expected it, even if it was only fleeting. It inspired her Pulitzer Prize winning poem, and her success with the National Book Award, and she inspired Soares’ Flamengo Park in Rio. The story of their life, their love and their legacies is definitely worth a watch, but don’t go in searching for happiness, because even in the film, it’s only fleeting.